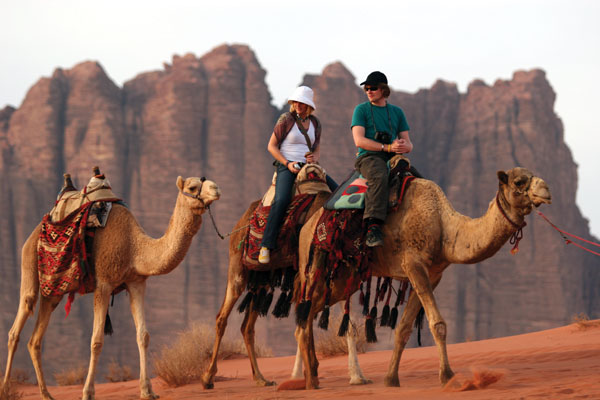 Tourism to Jordan is bouncing back with growing passenger numbers and new itineraries, finds Joanna Booth.

If tourists were water, the Jordanian desert would be in bloom. After a few barren years for this Middle Eastern gem – mainly down to its neighbours’ political unrest, rather than any home-grown troubles – travellers with a pent-up desire to see Petra and Wadi Rum are surging back.

At Regent Holidays, bookings are up 200% year on year. At KE Adventure Travel, it’s 128%. At Cox & Kings, passenger numbers are up 157% on this time last year, motivating the operator to launch a luxury version of its best-selling tour – the eight-night, £2,895 Jordan in Style – for next year. G Adventures reports a 70% increase in passengers, and as a result, has trained up 10 new guides to work in the destination.

Jordan has much to offer, with unique cultural sights, dramatic desert landscapes, high quality accommodation and infrastructure, and stable government. Many aspects, from its historic attractions that benefit from the explanations of a guide, to the harsh conditions of the deserts, make it fertile ground for the comfort and security of escorted touring. 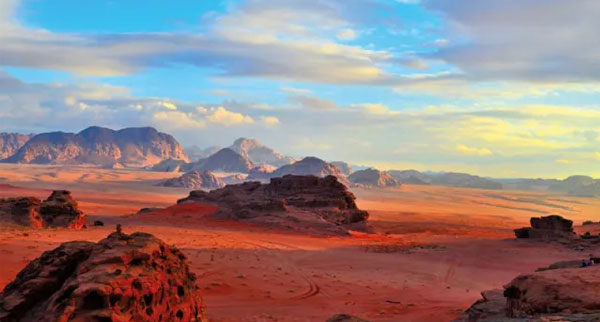 It’s not only the more adventurous operators that are getting in on the act. After a break of four years, Riviera Travel is welcoming Jordan back to its programme with a seven-day, £1,389 tour taking in highlights including Petra, Wadi Rum, Jerash and the Dead Sea. Travelsphere has a new, eight-day Jordan’s Ancient Wonders trip for 2019, with the option to upgrade to a stay in a clear Martian Dome at Wadi Rum for a swanky sleep under the stars.

Youth operator Topdeck Travel has seen interest in its Jordan tour double, and has tweaked its itinerary to offer a desert camp stay at Wadi Rum.

Families are well-catered for, with dedicated itineraries from adventure operators including Explore – the operator’s nine-day trip, from £1,639, lets kids meet Bedouin in the desert and enjoy the beach in Aqaba, with trips running in the Christmas, Easter, May half-term and summer holidays.

“A trip for female travellers will allow passengers to learn about the everyday lives, customs and challenges for women in the country.”

Those travelling alone could join Just You as the operator returns to Jordan next year with an eight-day fun packed itinerary starting from £2,199, with a cooking class and a stay in a Bedouin camp thrown in.

New for 2019 is Intrepid Travel’s eight-day, £1,260 Women’s Expedition to Jordan, a trip for female travellers that will showcase the destination’s sights but also allow passengers to learn about the everyday lives, customs and challenges for women in the country. Experiences will include discovering the ancient art of henna with Bedouin ladies, spending an afternoon at a ladies-only beach and learning about Arabic cooking at a local’s home.

What are they doing?

Simply seeing the sights may be enough for some clients, but Jordan is expert at obliging those who like an extra angle to their trip. Active specialists offer a range of hiking and biking trips. Intrepid’s nine-day, Cycle Jordan tour, launched this year, from £1,080, has sold so well that departures are being increased for next year, and KE Adventure Travel reports that its Dana-to-Petra trek was a best-seller, with clients keen to discover the most famous stretch of the Jordan Trail, a new long-distance hiking route. The operator also offers a multi-activity Ultimate Jordan Adventure from £1,575, including canyoning, cycling, hiking and camel riding.

“Seeing the sights may be enough for some clients, but Jordan is expert at obliging those who like an extra angle to their trip.”

More thoughtful pursuits are on the horizon, with a new Real Food Adventure from Intrepid, where travellers breakfast with a Jordanian shepherd, eat a Bedouin underground barbecue, and cook lamb with a local family. Launching in November, Explore will offer a Jordan photography tour.

On The Go tours knows timing is everything, and offers festive departures allowing guests to enjoy Christmas in Petra or new year in Wadi Rum. Plus, passengers on a special Perseids Meteor Shower departure in August will get the best views of this phenomenon with no light pollution from a desert camp at Wadi Rum. 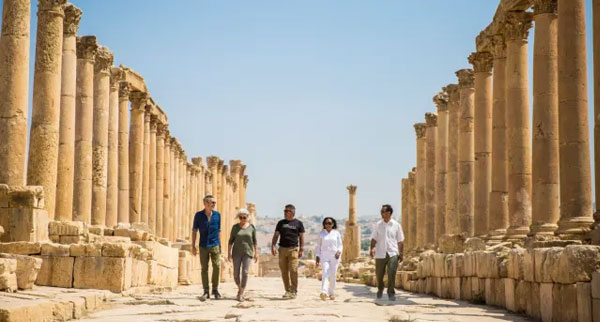 Five sites not to miss

Petra – The breath-taking grandeur of this famous ‘rose-red city’ never fails to thrill, its place in popular culture cemented by a starring role in the finale of Indiana Jones and the Last Crusade. Visitors enter through the narrow Siq gorge, and emerge to see the magnificent, 40m-high façade of the Treasury.

Wadi Rum – Another silver screen star, depending on the age of your clients they might recognise these pillars in the desert from Lawrence of Arabia or The Martian, starring Matt Damon. Around these epic rock formations, visitors will find expanses of quintessential sandy desert.

The Dead Sea – The name says it all – no fish can survive in this super-salty brine, a lake at the lowest point on earth, more than 400m below sea level. No need to mourn – instead it’s become spa central. Clients can bob around in the mineral-rich, buoyant waters, and slap on the rich, black mud.

The Red Sea – If it’s fish they’re after, Red makes up for Dead. At Aqaba, Jordan’s Red Sea resort, they can snorkel or scuba among extensive coral reefs with vivid fish, before returning to land to relax on the sandy beaches.

Jerash – Less well-known than Petra, but just as striking, Jerash is home to a vast site of Roman remains, with a triumphal arch, colonnaded streets, and a hippodrome that hosted chariot races. 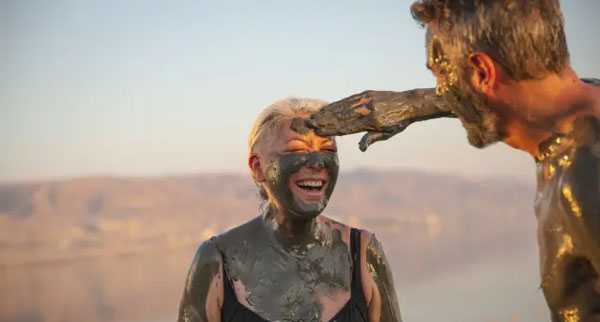 Jordan’s relatively small size and location at the crossroads of Africa and Asia make it an easy twin with similarly culturally-rich destinations.

Israel is one of the most common partners, giving clients the opportunity to tick off two icons, Petra and Jerusalem, in one trip. Cox & Kings has launched The Wonders of Jordan and Jerusalem, a 10-night trip allowing clients to do just that, plus Bethlehem too.

“Israel is one of the most common partners, giving clients the opportunity to tick off two icons, Petra and Jerusalem, in one trip.”

For younger travellers, Contiki has a new Israel and Jordan itinerary for next year, which includes a visit to a Jordanian women’s cooperative supported by The Travel Corporation’s TreadRight Foundation.

Egypt makes another popular pairing, particularly for adventure operators including Tucan Travel and Intrepid Travel. The latter’s wide range of trips allows clients to combine Jordan not only with Israel and Egypt but also the Palestinian Territories and Oman.