Asia Pacific growth of 9.6% was more than three times stronger than the Middle East, where flight departures rose by just 2.8%.

Europe was the second best-performing region with air travel up by 5.8% year-on-year. Flight departures from Africa grew by 5.2% and from the Americas by 4.4%.

The statistics come from ForwardKeys, which predicts future travel patterns by analysing 17 million booking transactions a day and other aviation data.

Highlighting the need to improve the travel experience for passengers and to better manage capacity, he added: “Yet another year of strong growth in air travel will put pressure on governments worldwide to invest in infrastructure to better manage the consumer’s growing appetite to travel.”

Whilst air travel grew in nearly every part of the world, there were substantial regional variations

The growth in Asia Pacific was driven primarily by increasing travel within the region.

Domestic travel was up 14% and departures between Asia Pacific countries were up 9.6%, while intercontinental departures rose 4.5%.

“As the middle classes of large urban centres – especially in China – have more money in their pockets and a growing appetite for travel, they fly more often, initially within their own continent, and then further afield. They have become a major driver of leisure and business travel worldwide.”

European air travel grew at virtually the same rate as the global average, but international travel within Europe, which was up 7.0%, grew faster than trips to other regions of the world, which was up 2.8% – a sign of the good shape of the European economy.

The Middle East registered the highest growth of intercontinental departures from Europe, at 5.8%, helped by the easing of security concerns regarding Egypt.

By contrast, the trend in the Americas was in the opposite direction.

Assisted by several new routes such as New York to Nairobi, Africa was the fastest growing destination for travellers departing from the Americas, up 8.5%.

Despite the ongoing blockade of Qatar, which started in June 2017 and continues to hamper regional international travel, the Middle East registered a 2.8% increase in air traffic.

The decline of intra-regional travel was compensated by double-digit growth in domestic travel, up 10.9%, and a 2.5% increase in departures to other regions, with Europe benefitting the most from this trend, up 8.3%.

Domestic air travel in Africa fell by 0.9%, but growth in international trips to other African countries was strong, up 6.6%, and growth in travel to other continents, where Africa’s main trading partners are located, was stronger still, up 7.8%. 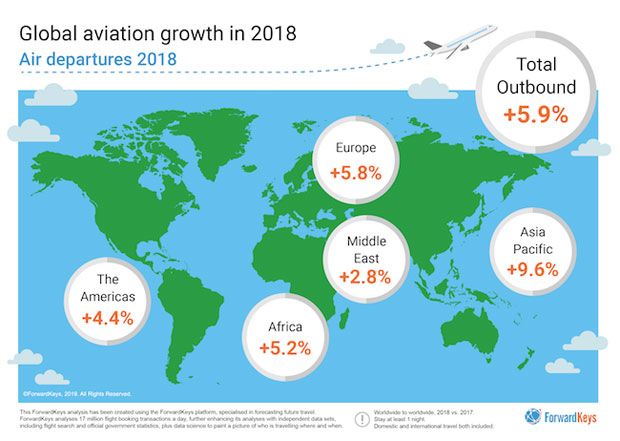