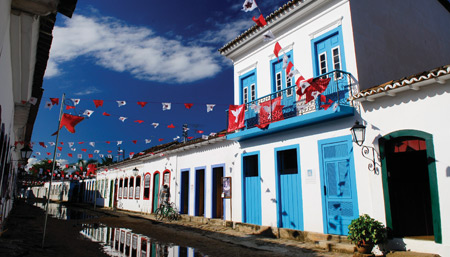 With Rio currently celebrating its winning bid to host the 2016 Olympics, the spotlight is set to make Brazil shine even more brightly.

Unlike many of its South American neighbours, Brazil has a fairly large and relatively wealthy middle class, so domestic tourism is big business.

“Brazil may be new for us in the luxury market, but it is old for them,” explains Exsus marketing and PR manager Lucy Clark. “They’ve been hit less hard by the recession, so their own economy is driving a lot of top-end tourism, and now it’s beginning to open up internationally. Peru and the Galapagos used to be our biggest sellers in Latin America, but this year Brazil and Argentina have taken over. They’re booming.”

While Rio has always been patronised by the rich and famous, until recently there has not been a contender to rival the iconic Copacabana Palace hotel. The boutiques that the city has been missing are now opening up. The Fasano was among the first – a very glamorous option in the Ipanema neighbourhood, an uber-cool part of town that makes the Copacabana area look like it has had its day.

Down the coast, the Portuguese colonial town of Paraty will welcome a new upmarket boutique, and even out in the Amazon, in Manaus, luxury is being developed in the shape of the new Anavilhanas Jungle Lodge.

Clark earmarks Brazil’s northeast as the area to watch for luxury. “The Brazilians have been going for years, but there are loads of new openings in and around Trancoso, which are ideal for the British market,” she says.

This lovely fishing village has all the attractions of a sleepy Brazilian town, where kids play football on the square, but because of the influx of rich Sao Paulistas, and those visiting from Rio for their holidays, it’s also home to wonderful restaurants and a wide range of top-end boutiques.

Fashion brand Diesel’s creative director Wilbert Das is the mastermind behind the Uxua Casa hotel, which opens this year. It is definitely for the rich and reclusive who wish to sample real Bahian culture, rather than faceless international luxury. The nine casas maintain a rustic air and have private plunge pools, individual gardens, wireless internet and satellite TV.

Outside Trancoso there are a few remote high-end lodges. The boutique desert island hideaways such as Fazenda da Lagoa and Tauana are a helicopter ride away – perfect barefoot luxury escapes.

If there is any evidence needed that the charms of this area of Brazil – the spectacular beaches, fantastic cuisine and strong cultural heritage – are suited to top-end clients, well, rumours abound that international brands are on their way, ready to buy land and build. Send clients now before the rush begins.

The land Down Under has made leaps and bounds with luxury accommodation in recent years, and this is paying off as deep-pocketed clients embrace the new, deluxe properties. Previously, it had struggled to match up to other areas when it came to attention to detail and service, according to Bridge and Wickers product director Rachel Gleave.

“Now top-end luxury lodges – such as those found in New Zealand – are opening up in Australia too,” she says. “Year on year we are getting more high-end bookings.”

Last week, Emirates Hotels opened the luxurious Wolgan Valley Resort and Spa in the Blue Mountains outside of Sydney. Each of the suites in this eco-friendly £57 million development has a private deck and an indoor/outdoor pool, and the restaurant will focus on organic, local produce and the fine wines produced nearby.

“There are now enough of these high-end properties to allow us to package up a lodge circuit of Australia,” says Gleave.

On top of the chic urban retreats and luxury lodges, there is another level of luxury.

Gleave says: “Australia is about getting out into the wilderness, and there are a few rustic resorts that don’t provide the same level of amenities, but are in such amazing places that the location itself is part of the luxury. They wouldn’t suit a Sandy Lane-type of luxury client, but those who crave unique experiences love them.”

She namechecks luxury tented camp Sal Salis on the remote coast of Western Australia and Bamurru Plains, a luxe lodge near the Kakadu National Park in the Northern Territory.

Wealthy but adventurous clients tend to mix and match their holiday options to provide the contrasting experiences that make Australia so appealing as a destination.

For example, many of Gleave’s clients will take a camping safari in Kakadu – which, though expensive because of the quality of the guiding, is pretty basic – with relaxation and pampering on Lizard Island, where they can pay about £1,000 a night.

The luxury openings have raised the bar, and the Aussies are stepping up, with further high-end openings mooted for the next few years.

These African newcomers are offering exciting alternatives to the traditional Indian Ocean favourites.

Both work well as twin-centres with safari breaks, with Mozambique easy to connect to from Johannesburg and Kruger. The island of Zanzibar works well with mainland Tanzania or Kenya, or as an alternative combination to twin with the Maldives or Mauritius.

“Mozambique will never be huge – it hasn’t got the same airlift as the Maldives,” says Beverley Pridmore, Hayes and Jarvis regional product and contracts manager, Africa.

“However, that’s no bad thing as it helps to keep it exclusive. We offer properties on Bazaruto Island – the sea is warm, coral reefs surround the island, and it’s an offshore marine reserve, where visitors can dive with whale sharks, dolphins, turtles and dugongs.”

Mozambique has always been frequented by the South African market, and so standards at the lodges are high, with good service, though product in the north of the country tends to be slightly less developed than in the south.

Zanzibar’s exotic promise has motivated Elegant Resorts to feature it for the first time this year, as clients look for new and exciting options.

“Clients have changed,” says commercial director Alison Scott. “Where once they were happy to simply be pampered, now they want inspiration and enrichment on top of the other luxuries. Zanzibar has that wow factor. The quality of resorts is improving.”

Both Mozambique and Zanzibar offer a wilder, more deserted alternative to traditional Indian Ocean destinations. They’re an easy sell as beach destinations with an exotic thrill that may have slightly worn off the likes of Mauritius and the Maldives.