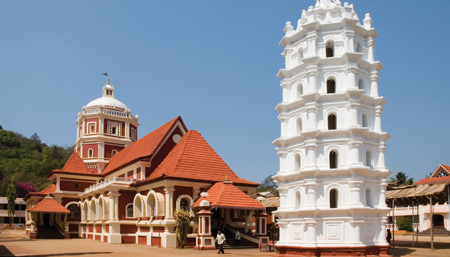 On an Indian scale, Goa is a miniscule province of just 1,429sq miles on the country’s western coast. It might be only slightly larger than Essex, but in terms of India’s package holiday market from the UK, it’s huge.

The area has long been popular with Europeans – back in 1510, the Portuguese defeated the ruling Bijapur kings and established a permanent settlement in the area. They hung around as long as they could, with Goa only finally becoming India’s 25th state in 1987, and the Mediterranean influence is still hugely evident, both architecturally and culturally.

Although the majority of the population is Hindu, a significant minority (25%) is Christian, and Portuguese-style houses and churches make up a portion of the historic buildings.

In the 1960s, Goa, like Ibiza, became a haven for hippies, attracted by the balmy climate and beautiful beaches. The same attractions proved popular with the European package market that grew up in the late 1980s and early 1990s.

Tourism is still Goa’s primary industry, with the destination providing great value winter sun, either as a stand-alone holiday, or as the beach element of a multi-centre itinerary visiting India’s iconic sights.

“For the majority of first-time visitors to India the country comes as a big culture shock,” says Olympic Holidays commercial director Photis Lambrianides.

“Goa is far less extreme – a vibrant and colourful destination, with fantastic beaches, bustling resorts and great food. It’s an exceptional place to soak up some winter sun.”

Packages aren’t the long and the short of it though. Increasing confidence has resulted in Goa’s dynamic packaging market expanding, and accommodation-only supplier somewhere2stay.com is extending its programme for this winter as a result. In the tailor-made market, Goa is often added at the end of a classic Golden Triangle itinerary for a spate of relaxation.

Goa’s prices give it a real edge. It’s an extremely competitive long-haul winter-sun destination – you can pick up a fortnight on a bed and breakfast basis for as little as £600, including flights. Somak Holidays managing director Ash Sofat sees Goa as one of the best value-for-money destinations out there.

“Eating out is very cheap, and flights are cheapish too,” he says. “The hotels and facilities are fantastic for both couples and families – though it’s worth remembering that the swimming in the sea isn’t brilliant as there’s no reef protecting the coast.”

Those who holiday in Goa are often bitten by the bug and return time and again. “The repeat market is massive,” says Rob Ansell, long-haul product assistant for TUI Travel. “Hotels often have guests that have been back up to 15 years running.

Staff turnover is very low, and they tend to remember you which gives an incredible welcoming feeling. That said, first-timers are equally made to feel welcome, and staff will go out of their way to learn your clients’ names, and make sure they have a fantastic time.”

Goa caters for a wide market, but it’s crucial to know both your clients and the destination well so you can choose the right area to book. Luckily, the destination divides simply into two easily distinguishable areas.

The sleepy south of Goa caters to the higher end of the market. The hotels are spread out with no real resort centres, and as a result, holidays to this area tend to be more hotel-centric, with some properties available on an all-inclusive basis, and most offering a wide range of activities and entertainment.

“This is where you’ll find most of the big international chains, with Ramada, Hyatt, InterContinental and Holiday Inn all carving out their own spacious area along the long stretches of Goa’s southern beaches,” says Ansell. “The beaches stretch for miles, so clients will be sure to find their own uninterrupted space.”

Vibrant northern Goa is geared towards a younger market. Resort areas such as Baga, Calangute, Candolim and Sinquerim are built up, with plenty of shops, bars, restaurants, beach shacks and nightclubs.

The cheaper end of the accommodation market is found here – hotels are usually smaller in size and more basic in terms of facilities than those in the south. This is no stumbling block for tourists according to Ansell. “Guests tend to spend less time in the resorts, and the north remains as popular, if not more so, than the south.”

Scheduled carriers such as British Airways and Air India can take passengers to Mumbai, from there they can take a short connecting flight down the coast with the likes of Indian Airlines, Jet Airways or Kingfisher.

Qatar Airways is launching a new route from Doha to Goa starting on October 25 and flying four times a week.

While some people come to Goa with no more ambition than to soak up the sun on its white sandy beaches, there is plenty to do and see.

Goa’s capital, Panaji, sits in the centre of the province on the banks of the Mandovi River, at the point where it widens to an estuary to meet the ocean. It’s a relatively small place, with red-roofed villas and cobbled streets – the Portuguese ambiance is particularly noticeable.

Former hippy capital Anjuna has long been home to a large flea market, held on Wednesdays, which is very popular with tourists looking to browse and to buy. Haggling is expected, whether you’re buying cheap beachwear, handicrafts, tea or spices.

With the prevalence of beaches, it’s little surprise that water sports are widely available, with diving and snorkelling, windsurfing and waterskiing, fishing and sailing on offer.

Thomson offers 14 nights’ bed and breakfast at the Alor Grande in Candolim from £599 per person, including flights from East Midlands and transfers. thomson.co.uk,0871 231 4725

Olympic Holidays offers 14 nights’ bed and breakfast at the four-star Riviera De Goa Hotel in Candolim from £795 per person including flights from Gatwick and transfers. Price is for departures between January 1 and February 10. olympicholidays.com, 0800 093 3322

Cosmos Holidays offers seven nights’ bed and breakfast at the Ticlo Resort in Calagunte from £629 including flights from Gatwick. cosmosholidays.co.uk,0871 4238422