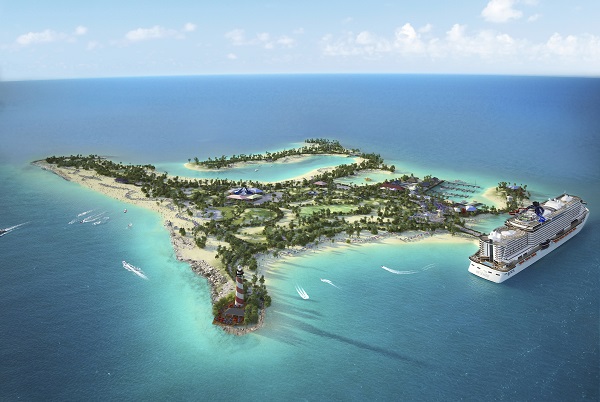 MSC Cruises’ new private island in the Caribbean will give guests a “ticket to paradise”, according to chief executive Gianni Onorato.

Ocean Cay, 20 miles off the coast of the Bahamas and 65 miles from Miami, will boast eight “pristine” beaches, seven reserved for different guests, such as families, Yacht Club or Aurea Spa passengers, and one for crew.

There will also be a sunset beach, lagoon beach and main beach where all water sports and activities will take place. Water sports will include snorkelling to a shallow sunken shipwreck through to scuba diving.

Lectures on the coral life around the island and what MSC has done to clean up and preserve it will be offered, something Onorato felt would be popular with younger guests and children.

Every Caribbean itinerary from Miami, whether sailing to the Eastern or Western Caribbean, will call at Ocean Cay. Onorato said: “Because it’s so close to Miami, we can stay there until 1am so people can experience it at night and still be back in Miami for 6am the following morning.”

Guests will be able to watch movies under the stars with their feet in the sand.

Food will include a family buffet and a food cart going around the island, but the ship’s restaurants will remain open all day as many guests are expected to go back on board to eat. The furthest point of the island is a 17-minute walk from the ship and “completely flat”, Onorato said.

Deckchairs and some activities will be included in the cruise price, but cabanas, cocktails, island Wi-Fi, and certain sports like scuba diving will be extra. All will be bookable through package upgrades via the MSC app.

Onorato also revealed there would be a second private island, for groups of 30-40 people, that could be booked out exclusively for the day. He said this would be a perfect upsell for travel agents. Costs for this and other extras would be added to the website at the end of the month.

The island will have three shops; one selling Bahamian goods manned by locals, one selling Ocean Cay-branded merchandise and the other selling MSC items.

Onorato said it was his “dream” to open an island in the Mediterranean but explained that the only location it would be possible to have an island open year-round, off the North African coast, was currently out of bounds.

“We will have to wait, but it is my dream to open a private island in the Mediterranean at some point,” he said.