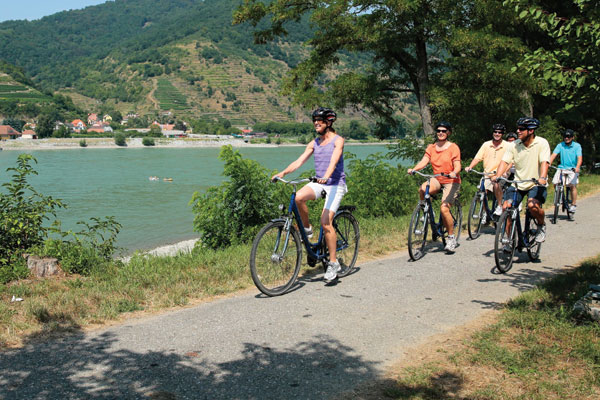 Jane Archer reports from three contrasting cruises along the Danube.

Mention the Danube and most people think blue, Strauss and waltzing. They’d be on the right track, but only getting part of the story.

The river flows from Germany to the Black Sea, passing through eight countries and offering many different experiences. Whether your clients are into history, culture, music or art, in search of adventure, or dedicated to staying in shape even while on holiday, this river has their name on it.

If there is one thing worse than exercising, it’s realising just how unfit you are, I muse, as AmaWaterways’ fitness guru Selina instructs us to lie on our backs and lift our legs and shoulders so we touch our knees with our heads.

I’ve ticked off all sorts of things to do in Passau: cycled along the Inn River, one of three waterways that converge in the German town; peeked inside St Stephen’s Cathedral, which has the largest cathedral organ in the world; and even sampled its Christmas market in the depths of winter. But performing strange contortions on the sun deck of river ship AmaLea while it is docked in town is something very different.

“A full-time ‘wellness’ host leads complimentary keep-fit classes on the vessel every day, as well as giving talks on healthy eating.”

Selina is on board to give us a taste of what’s to come this year, when a full-time ‘wellness’ host will lead complimentary keep-fit classes on the vessel every day, as well as giving talks on healthy eating and relaxation techniques. 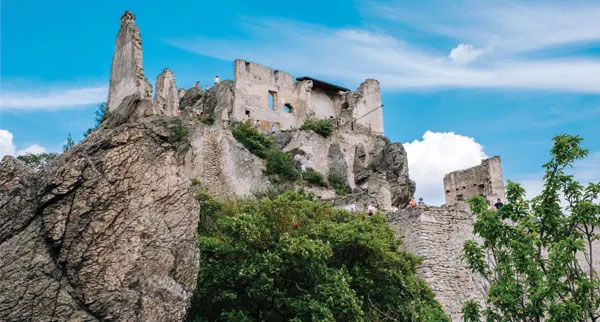 It’s all part of a move by AmaWaterways – and other river cruise lines including Emerald Waterways, Uniworld River Cruises and Avalon Waterways – to keep in step with the growing wellness trend and persuade younger and more active people to try a river cruise.

On this Danube cruise from Budapest to Vilshofen, a walking tour in the Slovakian capital of Bratislava took us to a fortress some 144 steps and a gentle incline above town.

So far, fairly easy. Not so in Durnstein, where a challenging uphill climb leads to a ruined castle where Richard the Lionheart was held captive some 850 years ago while he was on his way back from the crusades. Storyboards (in English) along the way explain what happened, and are a great excuse to stop for a breather.

“A walking tour in the Slovakian capital of Bratislava took us to a fortress some 144 steps and a gentle incline above town.”

For those keen on pedal power, there are guided bike tours along the river from Vienna and around Linz, and a 20-mile ride from Weissenkirchen to Melk that’s mostly flat apart from one fiendish uphill stretch.

How often have your clients told you river cruising is only for old people? It’s time to tell them to get with the times.

Book it: From £2,733 per person cruise-only for a seven-night Melodies of the Danube cruise from Budapest to Vilshofen on AmaLea, sailing on April 26. amawaterways.co.uk 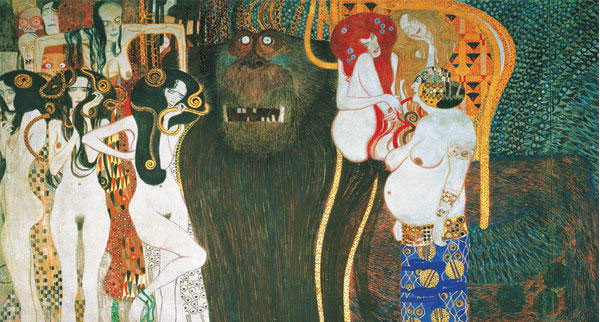 Amid all those perfect baroque cupolas in Vienna, there is an eye-catching, slightly misshapen golden dome made from 2,500 gilded laurel leaves atop a white building.

It’s called Secession, after a movement co-founded in 1897 by the Viennese artist Gustav Klimt in protest against the trend, then prevalent in the city, for building in neoclassical and neo‑Renaissance styles.

Vienna is known for its music, ornate palaces and coffee houses, but I was in the town on day three of a river cruise along the Danube with Titan Travel to check out its credentials as a city of art.

“There is an eye-catching, slightly misshapen golden dome made from 2,500 gilded laurel leaves atop a white building.”

It might not be up there with the Louvre in Paris or Hermitage in St Petersburg, but its museums and palaces are packed with masterpieces by Klimt, his protégé and fellow Secessionist Egon Schiele, and other renowned artists.

The city’s architecture holds its own too, covering every style imaginable, from Gothic and baroque to austere modernism and the whimsy of Hundertwasser (think quirky shapes, bright colours and no straight lines and you won’t be far wrong). 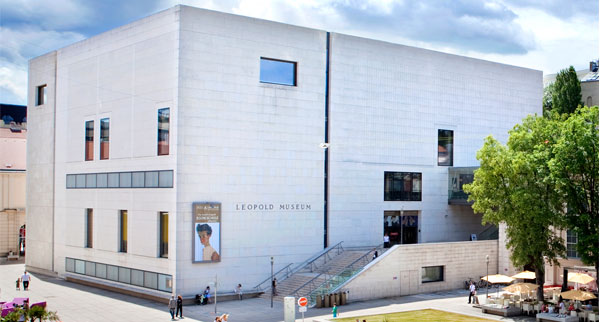 Art-themed cruises on the Danube are rare but it’s easy for clients with an eye for a good painting to plan a DIY tour, as I did, which also means they can stroll through galleries at their own pace and stop to admire their favourite works. Vienna is the highlight, but there are also excellent art galleries in Budapest and Bratislava.

In Vienna, the MuseumsQuartier houses the Museum of Modern Art and Leopold Museum, which displays works by Schiele. Klimt’s famous works The Kiss and Judith hang in the Belvedere Palace alongside paintings by other leading artists.

In Linz, the Lentos art museum houses works by Klimt, Schiele and other modernist and expressionist painters. In all it contains some 1,500 paintings and sculptures, and handily is right on the river so it is also very easy to find.

“Klimt’s famous works The Kiss and Judith hang in the Belvedere Palace alongside paintings by other leading artists.”

As clients will be doing their own thing and forking out entry fees to visit all these places, suggest river cruise lines including Titan, CroisiEurope and Amadeus River Cruises. They don’t include excursions in the price so clients will not be paying for tours they won’t be taking.

Book it: From £1,599 per person for Titan Travel’s 10-day Beautiful Danube cruise departing June 21 including flights, UK and overseas transfers, and two nights’ bed and breakfast in Prague.
titantravel.co.uk 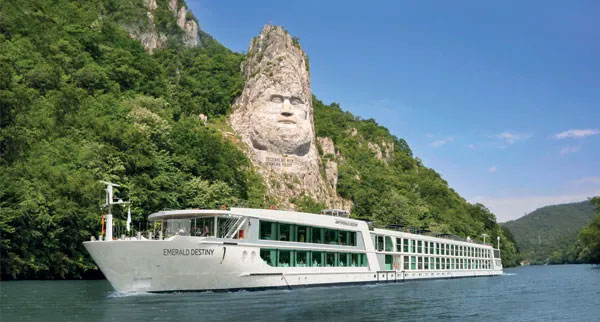 First, the bad news. Clients who thought they had ‘done’ the Danube when they cruised from Budapest to Passau (or the other way around) have actually barely sailed half the river. The good news? That means there is a lot more river for them to discover.

And what a river it is. The upper reaches have Vienna and Budapest, but the lower reaches, from Budapest to the Black Sea, have whip-cracking cowboys, brutal dictators, spectacular fortresses and grand palaces.

“The region was occupied by the Ottoman Turks for almost 500 years and gripped by communist dictatorships from 1945 to 1990.”

Cruises on the Lower Danube are not new, but they are in increasing demand among past passengers looking for new rivers to explore, and first-timers who want to learn about a region that remains shrouded in mystery even now, almost 30 years since the collapse of the Iron Curtain.

All delve into the history of the region, which was occupied by the Ottoman Turks for almost 500 years and gripped by communist dictatorships from 1945 to 1990. 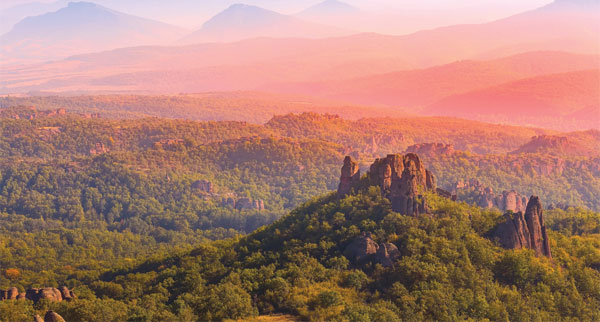 I sailed with Emerald Waterways, whose sailings include a pre-cruise hotel night in Bucharest and a tour of a vast palace built by former Romanian dictator Nicholae Ceausescu. Excursions on the river take in the former Bulgarian capital of Veliko Tarnavo, a rock fortress in Belogradchik and the Roman archaeological site of Viminacium.

All three trips involve an hour or two of driving – an important point to mention to clients as many may expect to be able to just walk ashore and see the main attractions.

“Excursions take in the former Bulgarian capital of Veliko Tarnavo, a rock fortress in Belogradchik and the Roman archaeological site of Viminacium.”

We also had a day to explore in Serbian capital Belgrade, one place where you can simply walk ashore (turn to page 107 for more on what to do there), plus we tucked into a home-hosted lunch in Croatia, and watched a spectacular show of Hungarian horsemanship by the aforementioned-cowboys, who raced around the ring on their steeds while we sampled the local wine. It’s the Danube with a difference – and you can’t beat it.

Book it: From £2,445 per person including flights for a nine-day Enchantment of Eastern Europe cruise from Bucharest to Budapest, departing May 18.
emeraldwaterways.co.uk

Sail from Luxor to Aswan on a Nile river cruise
Cruise ship review: AmaMagna, AmaWaterways
Canoeing down the Danube, Budapest