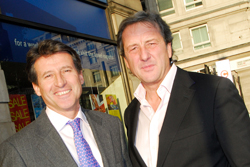 Thomas Cook has become an official sponsor of the London 2012 Olympic and Paralympic Games and will be providing UK short breaks and trips to the event.

Thomas Cook will provide short-break packages including accommodation, transport and event tickets for the Games. Tickets and packages will go on sale in 2011 and it is estimated Thomas Cook will sell more than 250,000 tickets with packages within the UK.

Thomas Cook chief executive Manny Fontenla-Novoa said: “More than a century after Thomas Cook escorted British travellers to the first modern Olympic Games in Athens in 1896, it is a privilege to once again have the chance to give British families and sports fans the opportunity to experience such a rare and special event in their own country.”

To launch Thomas Cook’s support of the Games, registration has been opened for those who want to keep up to date on its packages to the Games. Anyone who registers before December 20 this year at a Thomas Cook shop or online will be entered into a draw for an exclusive family weekend in London, including a tour of the Olympic Park.

LOCOG chairman Sebastian Coe said the deal was to ensure there were affordable and accessible packages available to the Games. “Our ticketing strategy is based on the principles of affordability and accessibility – we want to fill our stadiums in the summer of 2012 with sports fans and make it as easy as possible for families to travel to the Games.”