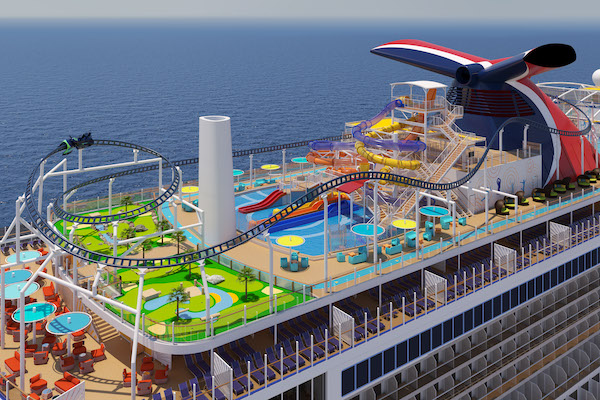 Carnival Cruise Line has released pictures of Mardi Gras, which will launch next year, boasting the first rollercoaster at sea.

Reservations for the ship’s itineraries will be open for sale on January 30.

Grand Central will be an entertainment complex, with a bar overlooking the starboard side of the ship and the first Punchliner Comedy Club.

Summer Landing will feature Guy’s Pig & Anchor Smokehouse Brewhouse plus a pool and whirlpools, and a bar, while Lido will offer popular restaurants as well as new concepts to be announced at a later date

The Ultimate Playground will be home to the cruise line’s biggest aqua park and Bolt: Ultimate Sea Coaster – the first rollercoaster at sea, which was announced in December 2018.

Christine Duffy, president of Carnival Cruise Line, said: “When our guests choose fun and book a holiday on Mardi Gras, they are going to find many firsts and exciting experiences, all enhanced by the fun atmosphere our great Carnival crew deliver on every cruise.

“We’ve specifically designed Mardi Gras to invite everyone to create their own personalised fun holiday experience with options to suit every age, mood or taste.”