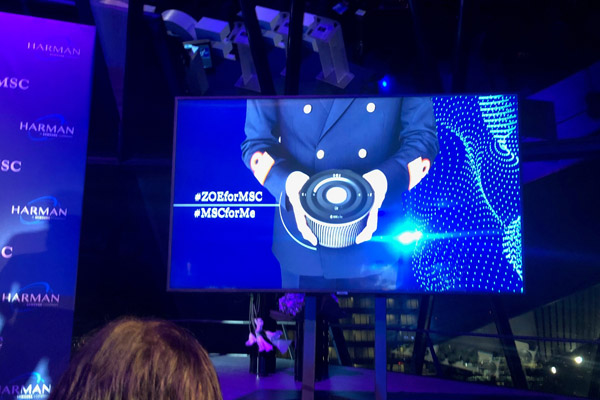 MSC Cruises has given a taster of life on board its new ships by demonstrating its new virtual personal assistant – Zoe – publicly for the first time.

He showed how information can be accessed via the personal cruise assistant using voice commands such as “Okay, Zoe” which turns on the device.

When it launches passengers will be able to book onboard services, a table, weather reports and play music.

Some 4,500 agents at Bellissima’s launch event on March 2 in Southampton will be able to activate the voice enabled artificial intelligence found in every cabin.

Sanjay Dhawan, president of Harman International, the company which helped develop Zoe, said: “Zoe is the most expensive crew member that MSC Cruises had ever had, but it is also the most productive.”

Onorato revealed Zoe would develop more responses to “900 or 1,000 questions” as it evolved.

In addition to Bellissima, Onorato said MSC Cruises had plans to introduce Zoe on MSC Grandiosa, due to launch in November this year, and MSC Virtuosa in 2020.

MSC Cruises’ ships which launched prior to 2017 would not be retrofitted with Zoe, he added.

Zoe has been designed to bolster MSC for Me, the line’s digital platform for passengers, which debuted on MSC Meraviglia in 2017.

Zoe will access the information and services it provides passengers through MSC for Me.

Antonio Paradiso, the line’s UK & Ireland managing director, said: “In 30 days’ time, we will be launching MSC Zoe on Bellissima. We are aware of all the fabulous features onboard and Zoe is one of the main ones.

UK agents would be given individual training on how to use Zoe effectively but only after the technology had launched on Bellissima, Paradiso said.

MSC Cruises’ chief innovation officer Luca Pronzati also revealed that the Kids Locator Service had been enhanced on Bellissima and through the MSC for Me phone app, passengers would be able track down friends and family.

The improved technology is called the Family and Friends Locator.

“It is not powered by Google Maps, it is powered by MSC,” Pronzati said.