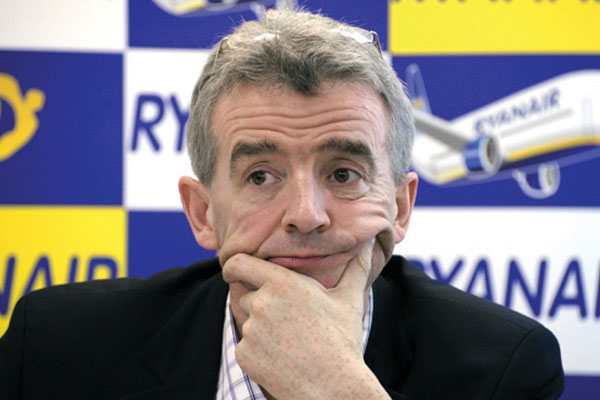 Controversial Ryanair boss Micheal O’Leary is to stay at the helm of the budget carrier for a further five years despite reporting a €20 quarterly loss.

The Irish airline blamed declining air fares to an average of €30 due to excess capacity in Europe for the dive into the red in the three months to December 31.

Strong traffic growth of 8% to almost 33 million passengers year-on-year was offset by a 6% slump in average fares.

It followed the failure of a number of airlines across Europe, with chief executive O’Leary predicting further casualties due to higher oil prices and lower fares.

Ryanair’s quarterly loss was reported as the airline disclosed that O’Leary had agreed a new five year contract until at least July 2024.

However, long-serving chairman, US billionaire David Bonderman, is to step down in summer 2020 to be succeeded by Stan McCarthy, former CEO of Irish food ingredients giant Kerry Group, who joined the board in 2017.

Ryanair said: “Stan will bring his enormous international experience and leadership skills to the development of Ryanair Holdings over the coming years, although a legend like David Bonderman will be a very hard act to follow.”

Referring to O’Leary, the carrier said: “His agreement to commit for a five year period is welcome, and will give certainty to our shareholders and allow him to guide the individual CEOs of Ryanair, Laudamotion and Ryanair Sun.”

Describing the airline’s third-quarter loss as “disappointing”, O’Leary said: “We take comfort that this was entirely due to weaker than expected air fares so our customers are enjoying record low prices, which is good for current and future traffic growth.”

Revenue in the period rose 9% to €1.53 billion, up 1% per passenger, due to a strong performance in ancillary revenue and increased traffic stimulated by a 6% decline in average fares to under €30 due to excess short-haul capacity in Europe.

O’Leary warned that the risk of a no deal Brexit remains “worryingly high”.

He said: “While we hope that common sense will prevail, and lead to either a delay in Brexit, or agreement on the 21 month transition deal currently on the table, we have taken all necessary steps to protect Ryanair’s business in a no-deal environment.

“We have now obtained a UK AOC to protect our three domestic UK routes, and we will place restrictions on the voting rights and share sales of non-EU shareholders for a period of time in the event of a hard Brexit to ensure that Ryanair remains at all times an EU-owned and EU-controlled airline, even if the UK exits the EU without a deal.”

He outlined how higher oil prices and lower fares have over the past four months have seen a wave of European airline failures including Primera, Small Planet and Azur, Sky Works, VLM, Cobalt and Cello.

“In addition, other bigger airlines like Wow, Flybe, and Germania are urgently seeking buyers or, like Norwegian, refinancing just to survive,” O’Leary added.

“Other airlines have also cut or closed bases in response to lower fares and higher fuel costs.

“Ryanair closed unprofitable bases in Bremen and Eindhoven and we cut aircraft numbers in Niederrhein and Hahn.

“Norwegian have closed multiple bases, many where they compete with Ryanair, including Rome, Las Palmas, Palma, Tenerife, Edinburgh and Belfast, and will cut their Dublin base from six to one aircraft in October.

“We expect more closures and airline failures in 2019 due to overcapacity in the European market, which is causing continued fare weakness,” he warned.

The airline expects to widen its low cost advantage over rivals from April with the delivery of its first five Boeing 737 MAX aircraft offering fur per cent more seats, 16% more fuel efficiency and 40% lower noise emissions.

“They will drive unit cost efficiencies over the next five years,” O’Leary said.

A “transformational improvement” of Ryanair’s digital platform is underway and is due to be completed before the end of the year.

“This will further improve personalisation, and triple capacity, as we grow to 200 million guests a year and welcome over one billion platform visits each year,” O’Leary said.

Separately, Rynanir revealed January carryings rose by 7% to ten million with a load factor of 91% while Austrian subsidiary carried 300,000 passengers.

This came as eastern and central European budget rival Wizz Air reported a 10% increase in passenger numbers in January to almost 2.6 million with a load factor of 88.1%.