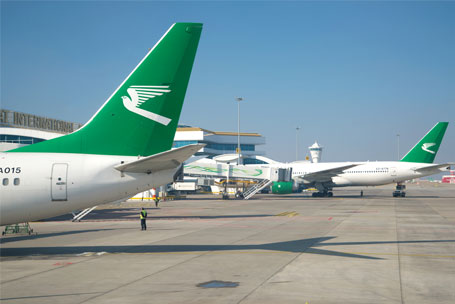 An airline banned by the European Air Safety Agency has restored one-stop flights between the UK and India and Asia using a replacement carrier.

Flights to and from the EU operated by Turkmenistan Airlines were suspended on Monday pending confirmation that it meets international air safety standards.

The ruling meant that services from Birmingham airport and Heathrow via Asghabat to points in India, China and Thailand stopped operating, reportedly leaving thousands on passengers stranded.

However, the Civil Aviation Authority confirmed last night that some flights to and from the UK have been restored, with services operated by Spanish licensed charter carrier Wamos Air.

The Foreign and Commonwealth Office also confirmed that Turkmenistan Airlines was making “alternative arrangements” for some services to and from the UK.

Wamos runs a fleet of long-haul aircraft including Boeing 747-400s and Airbus A330s and is the third largest long-haul carrier in Spain.

The Turkmenistan Airlines’ UK website confirmed that a flight from Birmingham was due to operate “per the normal schedule” leaving at 10.50pm last night.

“We will update you once we have received more information from Turkmenistan Airlines regarding the flights scheduled in the near future from the UK (Birmingham and London) and from Germany (Frankfurt),” it added.

However, the FlyTurkmenistanAirlines.EU website added: “Refunds are not permitted. If you have any questions, please contact your own travel agent or Turkmenistan Airlines directly.”

It added: “We will update you as soon we have received news from Turkmenistan Airlines regarding the operation of its flights into the EU.”