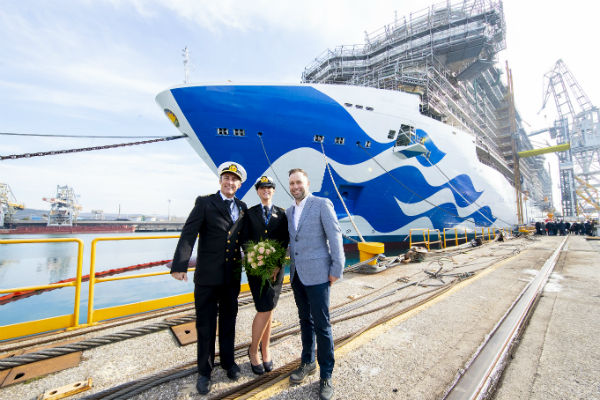 The day began with a live broadcast of a steel-cutting ceremony for the line’s sixth and last Royal-class ship, which is yet to be named.

The event took place at the Castellammare di Stabia shipyard in Naples, Italy. The section will be transported to the yard in Monfalcone where the construction will be finished by 2022.

The keel laying of Enchanted Princess , due to be delivered in 2020, and the float-out of Sky Princess, due in October this year, both took place at the Fincantieri shipyard in Monfalcone.

Enchanted Princess will launch in Southampton in June 2020.

In her role as Sky Princess’ madrina, Kerry Ann Wright, the second officer for Princess Cruises, smashed a bottle of Champagne against the hull of the ship.

She was nominated as Madrina by her fellow crew members.

The ships will be the largest built in Italy so far with a gross-tonnage of 175,000.