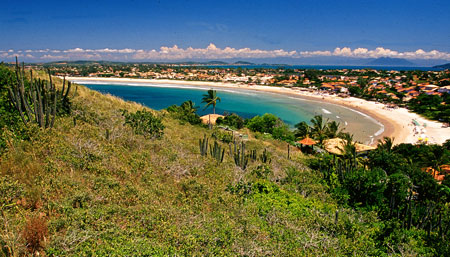 While the northern hemisphere shivers in the winter chill, why not send customers to warmer climes in the south?

Mexico has long been famed for its sun-drenched beaches (keep your eyes peeled for our indepth guide to the country’s Caribbean coast coming up in the December 12 issue), but the rest of Latin America has plenty to offer too.

Brazilian beaches are just as beautiful as the country’s famous beach babes, and with more than 7,000 miles of coastline basking under year-round sun, there are plenty to choose from.

Clients needn’t even leave Rio de Janeiro, as the city plays host to Brazil’s most famous beaches – buzzing Copacabana, where locals play foot volleyball, and tranquil Ipanema, where families relax among the beauties strutting their stuff.

Buzios is one of Brazil’s trendiest beach resorts, and a more laid-back option than Rio. Located about two hours east of the city, its streets are lined with pousadas, bars, restaurants and boutiques.

Beyond the beach: Rio de Janeiro; the Amazon; Iguaçí Falls; Salvador; The Pantanal.

The country’s idyllic beaches have long been enjoyed by these travellers, but will soon open up to another type of tourist, as Thomson Airways is to launch weekly direct flights from Gatwick in November 2010.

Peru is a surfers’ paradise – even the beaches in Lima offer world-class surf and boast the biggest wave in South America at Pico Alto.

The country’s lesser-visited north has fantastic and uncrowded surfing beaches, including Mancora, which has the largest left-hand, point break in the world, and the longest left-handed wave in the world at Chicama, which is more than two miles in length. The north also offers year-round sunshine.

Beyond the beach: Inca sites such as Machu Picchu; the Andes and the Amazon jungle; the Nasca Lines; and Lake Titicaca.

Beyond the beach: High Andean peaks; steamy Amazon rainforest; wildlife in the wetlands of Llanos and on the Orinoco Delta; and, of course, Angel Falls, the world’s highest waterfall.

This tiny Central American country is English speaking, and, along with gorgeous beaches, offers world-class diving.

Off the coast of Dangriga, in southern Belize, visitors can find the Blue Hole, a 410ft-deep underwater cave filled with dramatic rock formations. The barrier reef off the coast of the country is the second largest in the world, so the snorkelling and diving is very good everywhere.

Some tourists choose to spend their beach time around Placencia on the mainland coast, but many head out to the Cayes.

There are more than 200 islands but the lion’s share of the tourists can be found on Ambergris and Caulker, where accommodation from budget up to world-class luxury can be found.

Beyond the beach: Mayan sites such as Caracol, Xunantunich, Lamanai and Lubantuun; remote, wildlife-rich rainforest in Toledo; the Mountain Pine Ridge Forest Reserve in Cayo.

Most famous for its canal, Panama’s long, thin shape means it also possesses almost 1,900 miles of coastline. Suggest clients enjoy the unspoilt beaches and coral reefs at the Bocas del Toro archipelago or the San Blas islands, both off the Caribbean coast.

Beyond the beach: Panama city and the canal – the cloud forest in the mountainous Chiriqui region, home to jaguars and Quetzals; the cobbled Camino Real highway through primary rainforest.

Those who love to get off the beaten track should head to Nicaragua after hurricane seasons ends in November.

This large but little-visited part of Central America has both a Pacific and Caribbean coast. The latter is completely untouched by tourism, but off the coast the Corn Islands – a former pirate hideout – have white sandy beaches and clear turquoise water perfect for snorkelling the coral reefs.

The Pacific beaches are great for surfing and wind surfing. Montelimar and Pochomil are the closest resorts to Managua city, clean La Boquita is a tourist hub, San Juan del Sur offers a wealth of water sports and La Flor is a turtle nesting site.

Beyond the beach: Cities Granada and Leon; canoeing and wildlife spotting on Lake Nicaragua; jungles and volcanoes.