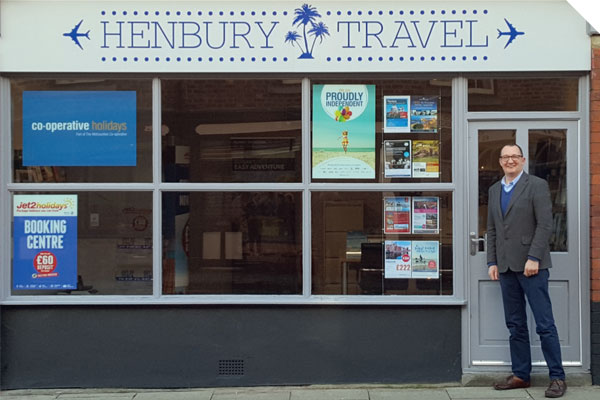 A former homeworker who invested in bricks and mortar for the first time last month has seen sales jump 30% year on year.

Richard Slater of Henbury Travel set up shop in Macclesfield, Cheshire, after 30 years as a travel agent.

Since opening at the beginning of January, Slater has bagged a number of bumper bookings including two 45-night trips to New Zealand, one £15,000 multi‑centre trip to Sri Lanka and several trips to Canada.

Slater, previously a Personal Travel Agents consultant with Midcounties Co-operative, decided to take the plunge when his local area of Chestergate in Macclesfield was tipped for regeneration. An upmarket food hall is due to open opposite his shop later this year.

He said around 65% of sales was repeat business from his former clients and the rest from new customers.

“I’ve had people coming in showing me a holiday they’ve seen and asking me to book it, and others who have heard of me before but now I have a shop have more confidence to come and book,” Slater said. “The majority of bookings last Saturday (February 9) were from new customers.”

An appearance on BBC Breakfast for a story about the resurgence of the high street and profiles in the local press have helped Slater build awareness of his agency in the local area.

Slater is planning to recruit a member of staff in the next month and has an option to expand next‑door in the future. He added: “I wish I had done it sooner but you can’t look back, only forward.”