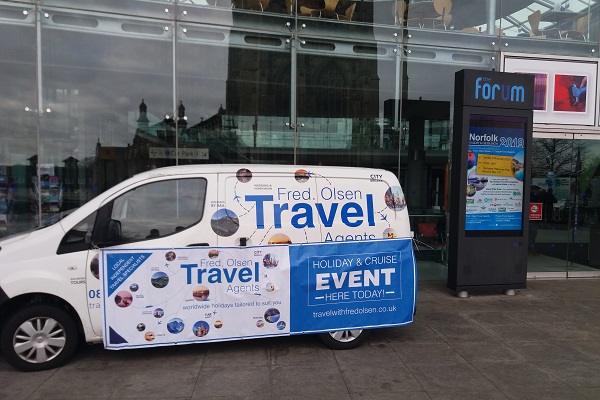 Fred Olsen Travel says it has seen turnover soar in the peak booking period, thanks to its biggest ever programme of marketing and events.

Paul Hardwick, group retail manager, said turnover from January 1 to February 20 was up by 24% year-on-year, at the same 13 agencies.

He said the average booking value has risen from £3,200 last year to £3,800 as more customers are booking long-haul holidays and cruises.

Hardwick said most of the agency’s customers were aged 60 or over and have been changing their holiday choices as Brexit looms.

“European holidays with the likes of Tui, Jet2, Thomas Cook and other mainstream operators are not doing so well. People are instead choosing cruises and long-haul,” he said.

“People are opting for Turkey, the Indian Ocean or the Caribbean.

He said his marketing team anticipated Brexit would be a concern for holidaymakers looking to book in the key turn-of-year period.

“Brexit comes up in the shops so we did a Q&A in our magazine in January addressing concerns, and options to overcome concerns,” he said.

“We produced 100,000 copies to drive bookings and that has been distributed to certain postcodes in our regions.”

The group held five holiday shows in Norfolk, Suffolk, Essex, Dorset and Hampshire, featuring 20-25 operators, with an event at Highcliffe Castle in Dorset in January – promoting agencies in Christchurch and Lymington – “hugely popular”.

“We gave away 380 tickets in advance and 450 people turned up,” said Hardwick.

“£120,000 in sales was achieved across the eight days after the show directly from customers who attended.

“We had an Essex holiday and cruise show at Colchester United football club that took £40,000 worth of bookings.”

Hardwick added: “We have had great support from operators such as Titan and Wendy Wu.

“The challenge is to keep it going, and we have fun incentives each week offering agents treats such as biscuits, pizza and coffee vouchers if they beat their figures.”