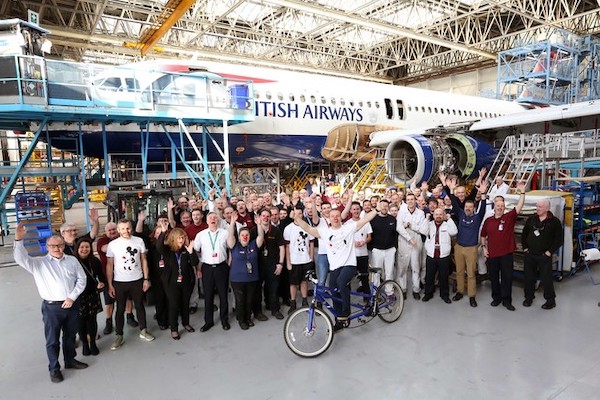 “A number of colleagues at BAMG are keen cyclists and have undertaken cycle rides to raise funds for Flying Start, notably when they took part in the NC 500, cycling 500 miles around the north coast of Scotland in just five days, raising several thousand pounds in the process.”

The next BAMG fundraising effort will take place in September when a team of 20 cyclists will take part in the Big Belter cycle ride between Glasgow and Edinburgh.

Sir Chris rode round the hangar on a tandem, accompanied by BA staff, before posing for a group photograph.

He commented: “Flying Start has done a tremendous job, raising more than £20 million for Comic Relief two years ahead of its 2020 deadline.

“I know that many of the staff at BAMG are keen cyclists and have dedicated many hours of their own time to raise taking part in a number of long distance cycling events, raising thousands of pounds for Flying Start and Comic Relief in the process.

“It was a pleasure to meet them and to encourage them to go on with their great fund-raising efforts for Flying Start, helping Comic Relief continue their fantastic work in improving the lives of underprivileged and deprived children throughout the world and here in the UK.”