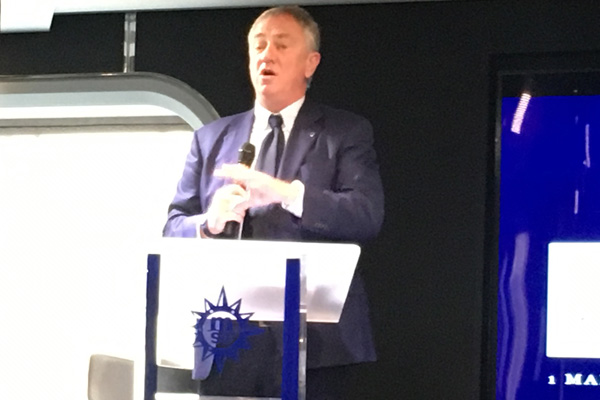 MSC Cruises’ executive chairman plans to base one of the line’s new ships in Southampton “sooner rather than later”.

Pierfrancesco Vago praised the performance of MSC Cruises’ UK team, adding that bringing new hardware to the UK for a full season was “obviously” on the cards.

Speaking at a Clia conference on board MSC Bellissima, Vago said: “We are making quite a few [ships] so there is choice. It all depends on the performance of this incredible UK team.

“They are doing so well so I think it will be sooner rather than later.”

Antonio Paradiso, the line’s UK & Ireland managing director, insisted it was his ambition to make the UK one of the top three markets in the world for MSC Cruises. The UK currently sits within the top five markets for the line.

He also added that Southampton would become a homeport for MSC in summer 2021, but confirmed it would be an existing vessel which will sail ex-UK itineraries.

In a bid to please the line’s British passengers, Paradiso revealed service charges will be included in the overall cruise fare from April 2.

“I am currently working with our chief executive to include them in all our cruise fares from April 2,” he said.

Previously, he had told Travel Weekly that he was “seriously considering” the move.

Earlier, Vago said MSC was aiming to have “zero impact” on the environment.

“There is a lot at stake,” he said, adding: “The environmental research that we do is huge.

“We are aiming to have zero impact on the environment.”

He said the line was reducing emissions in an “incredible way” by investing in Liquefied Natural Gas (LNG) at a time when there was no benchmark in the industry.