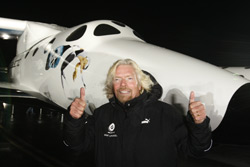 The spaceship, which has been christened VSS Enterprise, was unveiled yesterday at the Spaceport America in the Mojave Desert, New Mexico, in front of an audience including California governor Arnold Schwarzenegger.

Once operational, SpaceShipTwo will become the first commercial-manned spaceship as it takes up to six passengers on a flight into space at a cost of about $200,000 per person.

The unveiling represents another milestone in the Virgin Galactic space programme and comes following the successful test flights of SpaceShipOne in 2004.

It is hoped the programme will be up and running by 2011 and is on sale with Elegant Resorts, the UK’s only accredited space agent for the programme.