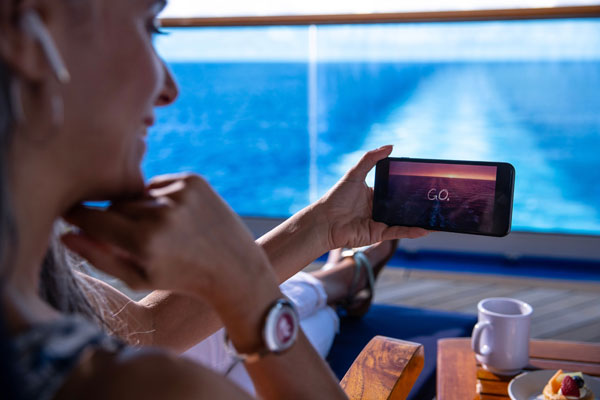 High speed on board Wi-Fi is due to be expanded to more than half the Princess Cruises’ fleet by the end of the year.

MedallionNet is expected to be available on ten ships, up from four currently – Caribbean Princess, Regal Princess, Royal Princess and Ruby Princess.

UK-based 3,080-passenger Crown Princess is due to receive the fast Wi-Fi access on June 30 during a summer of departures from Southampton.

This will be followed on August 3 by Emerald Princess as it sails the Mediterranean with departures from Rome, Athens and Barcelona.

Improved Wi-Fi will be added to 2,600-passenger Golden Princess on December 20 as it departs on voyages in Australia, New Zealand and the South Pacific.

The newest addition to the fleet, 3,660-passenger Sky Princess, will enter service in October fully Medallion-activated.

Dates for MedallionNet to go live on the remaining seven ships in the Princess fleet will be confirmed in due course, according to the line.

Princess also dates when three more of its ships will be fully Ocean Medallion-activated in 2019. They are Royal Princess on April 13, Crown Princess on July 24 and Sky Princess when it launches in the Mediterranean on October 20.

UK and Europe vice president Tony Roberts said: “The expansion of MedallionNet to a further six ships means that more guests than ever before can experience land-like connection speeds from anywhere on the ship.

“MedallionNet is a huge step forward for Wi-Fi at sea and offers guests fast, affordable, reliable and unlimited connectivity at sea.

“Guests now have the option to stay connected whenever and wherever they are. MedallionNet gives them the option to stream, video chat and connect as much or as little as they’d like, making it quicker and easier to keep in touch with friends and family back home and share those once-in-a-lifetime holiday experiences without sacrificing time at sea or ashore.”