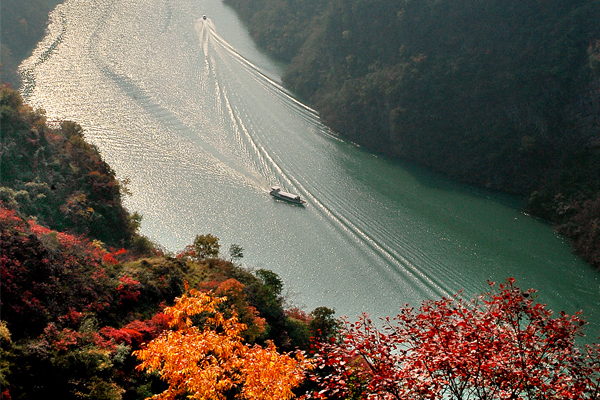 Jane Archer tests out a few of the adventures that await in the Far East.

Asia is the best seller behind Europe when it comes to river cruising. And no wonder – clients venturing east can experience everything from white-water rapids and mystical goddesses to close encounters with snakes and praying monks.

It’s an adventure, for sure, and also the way to discover awesome sights, fascinating cultures and fantastic food.

I’ve just volunteered to demonstrate the correct way to get into a rickshaw. “Stand on the box. One foot in, next foot in. Sit.” It’s the first day in Vietnam on a Mekong river cruise onboard APT’s AmaLotus and we’re on our way to a silk-weaving factory in the town of Tan Chau.

The words ‘comfort’ and ‘rickshaw’ don’t go together but I’ve already bumped around in the back of an ox cart and braved a tuk-tuk ride around the bustling streets of Phnom Penh on this cruise.

“Clients venturing east can experience everything from white-water rapids and mystical goddesses to close encounters with snakes and praying monks.”

Travelling in a box on two wheels, pulled along by a bloke who thinks he’s Bradley Wiggins, is just another first to tick off the list.

There were plenty such experiences on this cruise, a seven-night journey that linked Siem Reap with Ho Chi Minh City and included a few days in each city at the start and end with everything – excursions, meals, tips – included in the price. 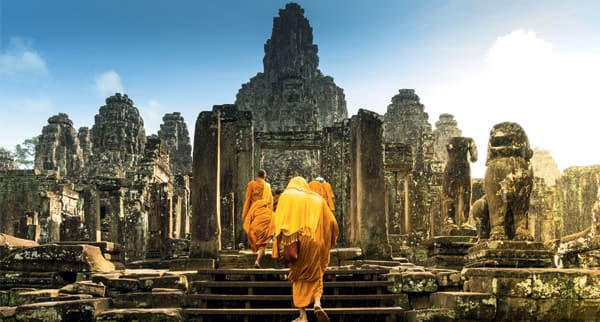 We were treated to sunrise over Angkor Wat with a glass of fizz in hand, blessed by monks, and given the chance to taste rice wine laced with snake, dubbed ‘Vietnamese viagra’ by the guides (to be honest, I passed on that, but a few brave souls stepped up to the mark).

In Phnom Penh, a poignant Killing Fields tour unmasked the brutalities of the Khmer Rouge regime, which tortured and murdered millions of Cambodians between 1975 and 1979.

River cruise lines including CroisiEurope, AmaWaterways, Scenic, Pandaw and Avalon Waterways offer Mekong cruises between Siem Reap and Ho Chi Minh, and the experiences they offer are just as memorable.

But APT has a trump card up its sleeve, namely Luke Nguyen, a top Australian Vietnamese chef who is not just a whizz in the kitchen, but also created the menu in Indochine, a speciality restaurant on AmaLotus, and owns Vietnam House Restaurant in Ho Chi Minh City, where APT passengers dine on the last day of the holiday. 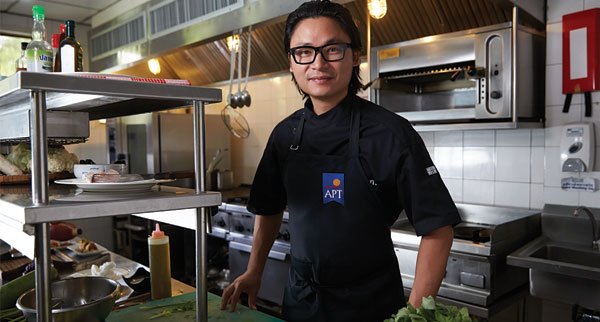 The food in both was exceptional – as was the service. A tasting menu in Indochine includes rice cakes, roast pork belly, tea-smoked duck and grilled sirloin. In Vietnam House, there’s meat, fish, noodles and rice dishes, as well as salads and soups, to choose from, so the smart thing is to let the waiters pick for you, or you’ll be there all night – as indeed we were!

Book it: From £4,395 for a 15-day Vietnam and Cambodia Highlights cruise-and-stay holiday departing September 12, including flights.
aptouring.com

My conversation is going something like this: “We’ll never fit. Oh, apparently we will.” “He’ll never make that turn. Ah, OK, he has.”

We’re cruising the Upper Mekong in Laos on Pandaw’s Sabaidee Pandaw and the ‘he’ in question is the captain, who is skilfully navigating us through a testing course of white water dotted with fierce-looking rocks.

Shooting rapids on a river cruise boat is a new one for me but Pandaw did promise that this trip, from Chiang Saen in Thailand to Vientiane, in Laos, would be an adventure.

We’ve ‘poled’ our way through shallow water (the sailors dipped a pole in the river to check the depth), scrambled ashore over muddy banks in the pitch dark, and visited remote jungle villages with no electricity, running water or paved roads.

We’ve also been up at the crack of dawn to give alms to the monks (sticky rice, one handful each), taken part in a traditional spirit ceremony and made wishes as we let fire candles float into the night sky. 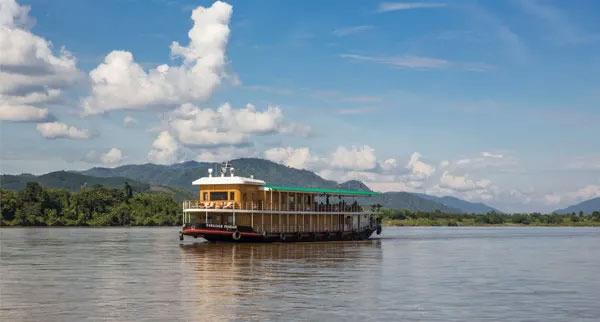 Sabaidee Pandaw was just out of the Thai shipyard where it was built when I embarked at the end of last year. It accommodates 28 passengers in 14 cabins that open on to the promenade deck, and has a large outdoor lounge and dining area, as well as an indoor lounge bar.

It’s one of three Pandaw vessels on the Upper Mekong, where the line has near exclusivity, and cruises sell like hot cakes with those seeking a cultural fix topped up with adventure.

The first task, once we set sail, was to stop at the Golden Triangle, where the borders of Thailand, Laos and Myanmar meet, to get our Laos visas – requiring $35, a passport photo and plenty of patience – and then we were off, ticking off one experience after another.

“An early-morning market sells everything from dried fish and vegetables to live shrimps and bats.”

The highlights included a late-evening walk to a village market; a visit to a school, where excited kids showed off their work; the Pak Ou Caves, where thousands of Buddha statues reside; the gushing Kuang Si Waterfall; and the golden Pha That Luang stupa in the centre of Vientiane, which has been the capital of Laos since 1560.

On a two-night stop in Luang Prabang, there was time to explore alone between tours to museums, monasteries and an early-morning market selling everything from dried fish and vegetables to live shrimps and bats. Call me picky but after that, I lost my appetite for breakfast back on board…

Book it: From £4,049 per person for a 10-night cruise from Chiang Saen to Vientiane departing December 8, including flights, one night in a hotel before the cruise, transfers, tours, local drinks and tips.
pandaw.com 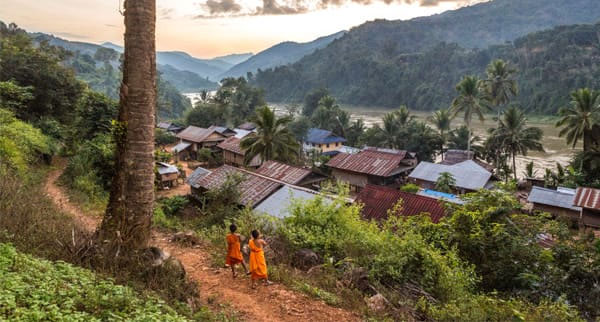 Tour manager Willie points skywards, where the Goddess Peak is rising up from the Wu Gorge on the Yangtze River. “The rocks resemble a girl looking down at the river,” he says.

We have to take his word for it because all we can see is the light mist that has blanketed the top of the gorge, giving the valley a mystical feel and blotting out all hope of seeing the Goddess or any of the 11 other peaks surrounding us.

“A cruise along this peaceful river provides an ideal break from touring China – a moment to unpack, draw breath and glimpse rural life away from the cities.”

The Chinese have various stories to explain their presence, but my favourite (because it is the least complicated) is that the 11 were mischievous dragons turned to stone by a goddess to stop them from flooding the river. She then turned herself to stone to keep a watchful eye on boatmen on the river below.

Wu Gorge is one of three scenic valleys that draw visitors to the Yangtze, and a cruise along this peaceful river provides an ideal break from touring China – a moment to unpack, draw breath and glimpse rural life away from the cities.

I was cruising on Sanctuary Retreats’ 124-passenger Yangzi Explorer, which sails three and four-night cruises between Yichang and Chongqing that APT, Uniworld River Cruises and Wendy Wu Tours package into longer tours of China. 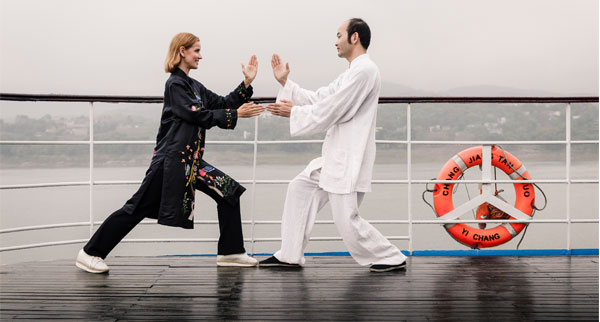 The vessel is acknowledged as the most luxurious on the Yangtze, partly due to its size (124 passengers compared with an average 400) and feeling of space on board, as well as its spacious cabins (all with balconies), and the quality of the fixtures and fittings.

The cruise might be a break from city sightseeing, but there’s little time to put your feet up. On my four-night sailing, I packed in pre-breakfast tai chi, classes in dumpling making and Chinese language, and lectures about Chinese medicine, reflexology and the river.

“Boatmen showed us how, in the days before engines and dam when the river ran wild, naked men formed human tractors to pull boats upstream.”

I also joined tours to a not-for-the-squeamish market in Fuling, selling pigs’ snouts and trotters. And the Three Gorges Dam – “the largest hydroelectric power station in the world, 1.4 miles long, 28 million cubic metres of concrete and $30 billion to build”, as Max – who, like many other Chinese guides, adopts another name for overseas visitors – repeated many times.

On a sampan ride on the Shennong Stream – a tributary of the Yangtze – boatmen showed us how, in the days before engines and dam when the river ran wild, naked men formed human tractors to pull boats upstream. Happily, on this occasion they kept their clothes on.

Book it: From $1,350 per person cruise-only for a four-night trip from Yichang to Chongqing on Sanctuary Retreats’ Yangzi Explorer, on selected dates from March to September.
sanctuaryretreats.com