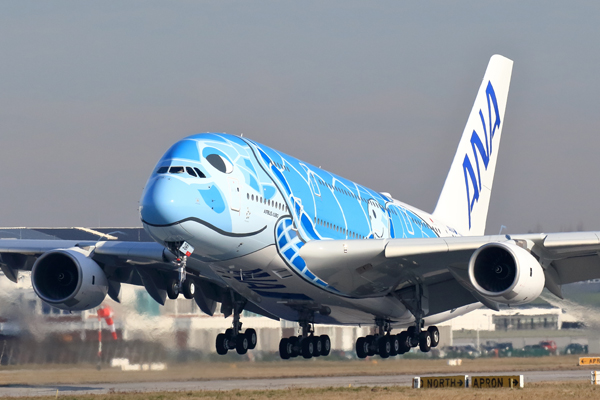 The first of three Airbus A380 megajumbos has been delivered to All Nippon Airways.

The airline is to introduce a ‘couch seat’ concept on the double decker aircraft, allowing passengers to lie across three or four seats.

Sixty will be available in the main 383-seat economy cabin on the 520-passenger aircraft.

ANA will deploy the four-class A380 on the Tokyo-Honolulu route from May 24, with two more aircraft to follow.

The second A380 will carry a Hawaiian ocean emerald green livery and is expected to roll out on March 25.

The delivery follows Airbus announcing that it is ending production of the giant aircraft due to a lack of orders.

However, ANA president and chief executive Shinya Katanozka said: “We believe the A380 will become a game changer for ANA and will enable us to increase our market share by doubling the number of seats connecting Honolulu and Tokyo by 2020.

“We will commit all three of our Airbus A380 to the Tokyo-Honolulu route with the goal of introducing a new level of luxury service to our passengers flying on the number one resort route for Japanese travellers.”

Airbus chief executive Thomas Enders added: “We are confident that the aircraft will be highly successful in service with ANA and are committed to providing full support to the airline all along the way.”

End of the line for A380 superjumbo as Emirates cuts order