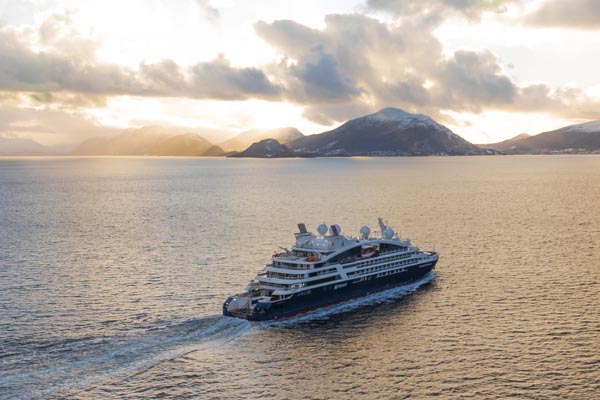 Le Bougainville, the line’s third explorers series ship, left Søvik in Norway on April 8 and is now sailing to Spain before its maiden cruise on April 15 from Malaga.

Ponant agreed a deal with Vard, the Norwegian subsidiary of the Italian shipyard Fincantieri, to build the 92-cabin ship, which has been named after Louis-Antoine de Bougainville, an 18th century French admiral and explorer.

All the cabins have a balcony or private terrace.

Like its two sister ships, Le Bougainville has been fitted with a multi-sensory underwater room built into the ship’s hull where passengers can view the seabed via two portholes. The room is called the Blue Eye.

Jean Emmanuel Sauvée, chief executive and co-founder of Ponant, said: “I wanted the ships in the Ponant Explorers series to embody the very best in expedition cruise. Le Bougainville is the incarnation of that.”