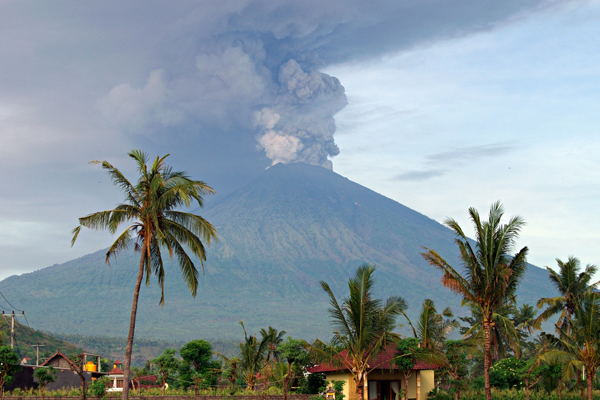 A volcanic ash cloud was sent up two kilometres as Mount Agung on the Indonesian holiday island of Bali erupted in the early ours of Sunday morning.

However, Australian media reported delays to Jetstar and Virgin Australia flights from Denpasar, with disruptions described as minimal.

But previous eruptions by the active volcano led to flight cancellations, with about 5,000 travellers affected in June last year.

Authorities continue to impose a four-kilometre exclusion zone around the active volcano.

But foreign climbers have tried to ignore the danger zone status and attempted to climb Mount Agung, causing rescuers to scour the mountain in a bid to evacuate them.

“This a normal situation of an active volcano and there is no need for the public to panic, as long as they remain outside the danger zone,” spokesperson for the country’s national disaster mitigation agency Sutopo Purwo Nugroho was quoted as saying.

“Don’t try to get closer to the crater to document the volcanic activity in the crater.”