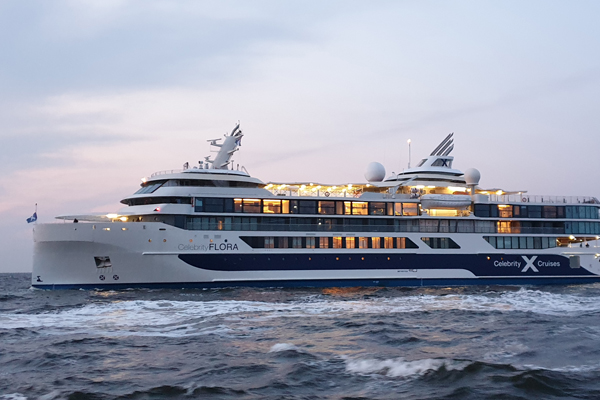 Celebrity Cruises’ boss has not ruled out increasing capacity in the Galapagos Islands once new ship Celebrity Flora has launched.

The new 100-passenger vessel will come into service at the end of June after it sails from the De Hoop shipyard, where it is being built, to the Galapagos Islands.

Next month, Celebrity will retire small ships Xperience and Xploration, which both currently operate in the Galapagos Islands alongside 100-passenger Xpedition.

Cruise operators are licensed to carry a certain number of passengers in the capacity-controlled archipelago.

Individual passenger licenses are bought from other operators in the Galapagos Islands and are often difficult to come by.

Lisa Lutoff-Perlo, Celebrity Cruises’ chief executive and president, said: “We are always looking for more [licenses] but they are highly sought after, and nobody is ever selling them.

“Right now, we are not expanding in the Galapagos any more than we already have.

“Will I say that we will never have a plan for that? No, I won’t. I never say never but we are going to get this one launched and then we will see what we would like to do next.

“We have not crossed that bridge yet.”

Lutoff-Perlo said Celebrity did not see itself as “an expedition brand” – even though it had operated in the Galapagos Islands for 16 years.

Celebrity claims Flora will be the first ship purposefully built for the Galapagos Islands when it launches.

The line named Yolanda Kakabadse, a former president of the World Wildlife Fund, as the ship’s godmother on Thursday (April 25).

Half of the accommodation on the vessel is comprised of Sky Suites fitted with Infinite Verandas – the line’s European river-style balconies first seen on Celebrity Edge. Every cabin on board is suite class.

Passengers can also book cabanas on the ship for $299 per night. The price includes food, beverages, nightwear and access to one of the 11 naturalists on board for the evening.

Celebrity Flora will sail year-round from Baltra in the Galapagos Islands, offering seven-night itineraries round the archipelago. Longer itineraries with pre-  and post-cruise expeditions are also available.