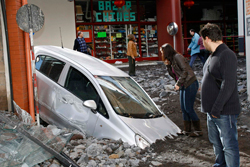 A British holidaymaker is among at least 42 people dead in Madeira after the island was hit by violent storms and floods.

The woman has been named in reports as 50-year-old Pamela Gaines from Garton on the Wolds in Yorkshire. She is thought to have been killed when a taxi she was travelling in was hit by floodwater.

Her husband George and another British couple who were in the taxi have been treated in hospital for minor injuries.

More than 120 people have been injured in the floods, which began after heavy rain on Saturday. Portugal is expected to announced three days of national mourning.

Holidaymakers have been asked to stay in their hotels, after muddy water coarsed through the streets of the capital Funchal. The number of Brits in hospital is thought to be less than five.

The island, which is 300 miles off the Moroccan coast, is a popular British tourist destination and is likely to have been busy during the half term break.

The Foreign Office is advising those due to travel to Madeira to contact their travel company.