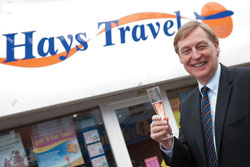 The rapid pace of change in the travel industry can seem bewildering at times, but it is something Hays Travel managing director John Hays thrives on.

From brochures and fax machines to multi-channel selling, Hays has witnessed the transformation of travel over the past three decades.

“The thing I love about travel is that it’s constantly changing and is so exciting,” he said.

“Some people hanker back to the golden age of travel, but I’m not wired that way.”

This month, Hays and his staff are celebrating 30 years since the opening of his first shop in a cramped space at the back of his mother’s children’s clothing store in Seaham, County Durham.

From this modest beginning grew an empire of 37 shops, 300 homeworkers and three call centres.

The biggest change Hays said he had witnessed was the impact of technology.

“Thirty years ago there were very few computers used in travel. I remember when the new brochures would be eagerly awaited; when they came out, customers would rush in to book and we would get on the phone to the tour operators.”

Despite the advent of the internet, Hays maintained the basic job of a travel agent remained the same.

“Now, prices change all the time, but the fundamentals of looking after your customers and maintaining good relationships with your suppliers haven’t changed.”

The key to Hays’ success is striving to give customers what they want, so Hays has ensured his business can cater for clients who want to pop into a shop, book online or pick up the phone.

“As long as we run a profitable business being an agent, we’ll stay in that territory”

As the company grew and diversified, Hays said he always sought to ensure it retained its “family” culture.

“As long as we run a profitable business being an agent, we’ll stay in that territory”

“Looking after the staff was easy when we had eight. Now that we’ve got 800, celebrating success is harder. But I like to think we have maintained the small company atmosphere.”

So what does the future hold? Hays Travel expanded into the north-west for the first time in December with the purchase of three St Andrews Travel shops in Bolton.

However, Hays did not see the move as a step towards UK domination.

“I’m relatively cautious by nature. I’d like to get a greater geographical spread but it’s easy to lose money in this business so I don’t have any major plans,” he said.

Hays Travel had a difficult start to 2009, but saw a “dramatic recovery” thanks to late summer bookings and finished the year up 11.5%.

This year, the group is also seeing strong signs of a recovery, with January up 36% on 2009. However, Hays remains cautious and is steeling himself for a prolonged
“bathtub-shaped” recession.

Regulatory changes are also expected to be an issue in coming months.

Despite the blurring of the tour operator and travel agent roles in recent years, Hays resolutely insisted he remained an agent.

“My stance is that as long as we can look after our customers and run a profitable business being an agent, we’ll stay in that territory,” he added. “After all, that’s where our history is.”

Having worked at Hays for 24 years, I’ve seen lots of changes. I remember when head office was a team of four including John. Back then, push-button phones were a novelty and none of us knew  what to do with a fax machine.

And I remember when a package was a real package. Now it’s different – you’ve got to be constantly on the ball.

Despite expanding, the company has always had a family-friendly feel. I love the customer contact and I’ve had clients that span the generations. We also have a budget to keep involved in the community.

I’ve felt very lucky to work for a man who’s always had faith in retail agencies and continued to invest in the shops and in technology.  John has always had the same ethos: work hard, play hard.