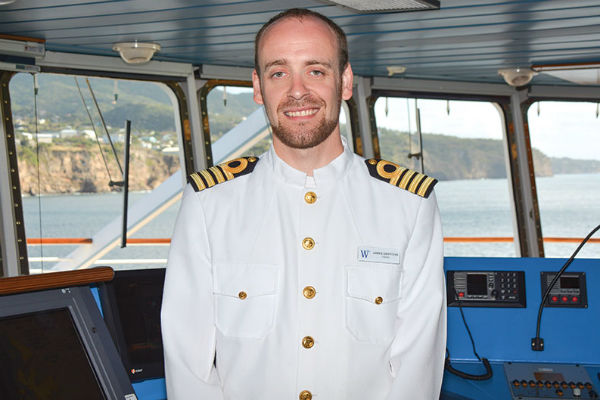 A British captain is to taken the helm of the much delayed discovery yacht Scenic Eclipse when it finally enters service in August.

He has worked on 12 different ships, commanding six of them, and visited more than 105 countries in an almost 20-year career at sea.

The introduction of 228-passenger Scenic Eclipse has been pushed back three times due to financial difficulties at the shipyard in Croatia where it is being built.

The vessel was originally due to start sailing in August 2018 but the date slipped back to January, April and now August 15 this year.

The vessel will feature a six-passenger submarine and helicopters for viewing the Arctic and Antarctica.

Scenic Eclipse is due to make its debut on a voyage from Reyjavik in Iceland to Quebec in Canada.

Griffiths said: “I am genuinely excited to see how guests will react to Scenic Eclipse.

“Everyone will take away something different; perhaps a journey to a shipwreck in our submarine, a flight over a glacier with one of our highly trained pilots in a helicopter, maybe watching the sunrise on the bridge with one of our deck officers, or memories of the excellent dining venues.

“For my crew, I have been delighted how quick the very best people in the industry have been to join me on board Scenic Eclipse.

“Scenic is not your average multi-national faceless company, it really does feel like a family, so serving our guests on board a ship like Scenic Eclipse will be a career highlight for many.”