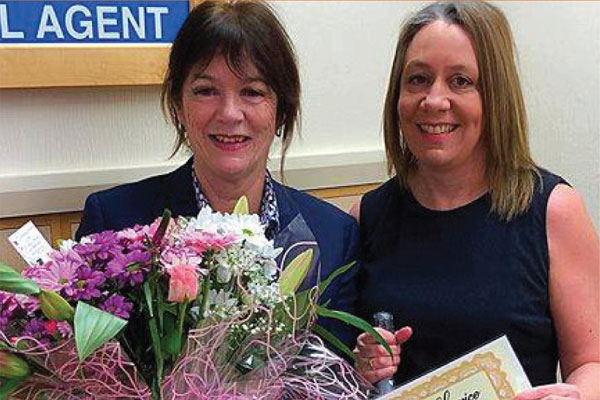 Lynne, 68, has clocked up 40 years at Althams Travel. Now a senior part-time consultant at its Morley branch in West Yorkshire, she has no plans to retire yet. Lynne receives her long service award from Althams Travel regional manager Claire Hargreaves.

Q: Why did you become an agent and what did you do in your early days at Althams?
A: It was 1979. I was 27 and had my family by then. To start with I just needed a job while the kids were at school. I saw an ad for a part-time clerical position at the Morley branch. I did that for a short while and then worked my way up to clerk and senior clerk. After a couple of years I went full-time. I got a manager’s job at the Wakefield branch and worked there for three years before the same role came up back at Morley, which meant I could walk to work again!

Q: What was life like in the agency when you started?
A: The job was mainly typing and admin. We had a long counter at the back and did bookings in pads, everything was written down in triplicate (three copies). I’d never sold anything before but it mainly involved talking to people and finding the holidays they wanted. The difference was that we didn’t have computers; it was all paperwork. We looked at brochures and went on the phone. If the BT lines were down, we were all stuck. Customers also knew less back then, and relied on you more.

Q: What has helped you do your job well and is still an important part of the role today?
A: All agents reading this will understand me when I say it is much easier to sell when you have experienced a destination and a product. I’m lucky I’ve travelled a lot and been on many fam trips so I have lots of experiences to talk to customers about. I have a few customers who have copied the holidays I have been on too! I have been on educationals to places including Mauritius, Nepal, the Caribbean, and Canada.

Q: How does being an agent in 2019 compare with 40 years ago?
A: Selling holidays is so different now and there seems to be more to do. There’s loads more paperwork even though we use computers. We print out tickets and check customers into their flights. I still like the face-to-face element the most. People come in the door when they see we’ve changed the window posters and some still want brochures. We have lots of regulars and some come in because they know I’m working that day. Lots of my customers have become friends. I still love the job – the best bit is when they come in and tell you they had a great holiday.

Q: Now you’ve hit your 40-year milestone, is retirement in your sights?
A: I have no plans to retire yet! For my 40 years’ service I got a £2,000 voucher for a holiday and we had a branch night out. I’ve not seen the Northern Lights or been to Reykjavik but am still thinking about where to go. I didn’t plan to stay 40 years; it just happened and I’ve never not enjoyed it. Althams is like one big, extended family

Q: What do you like doing in your spare time?
A: A few years ago I raised more than £7,000 for Martin House children’s hospice in Boston Spa in Wetherby by hiking up Mount Kilimanjaro. Customers sponsored me and the girls in the office did a chart to show how much I had raised. I also went to my children’s school and gave a talk about it. I love the outdoors.

My partner is a runner and got me into running, plus being a member of a walking club meant I was already doing a lot of walking. As a result, before I did Kilimanjaro, I had done lots of training. I was fine apart from the summit.

We walked through the night. We left at 11pm and the sun was just starting to rise as we got to the summit – but it was still pitch black and I felt sick and disorientated. I was so exhausted and because of the altitude you just want to get down again! I was 58 and it was a great achievement to raise that amount for a local charity for young children.