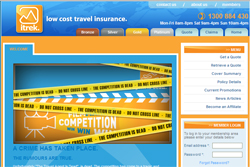 An insurance provider has been forced to drop a social media campaign called ‘The Travel Agent is Dead’ after receiving an “unprecedentedly hostile response”.

Australian site iTrek asked customers to send in 30-second videos based on that theme.

It has now scrapped the competition in response to pressure from the trade and its sister company Travel Guard, which uses agents to sell its insurance products
in the US and operates Direct-travel.co.uk in the UK.

A note on the website said: “The competition has come to a tragic and premature end due to the unprecedentedly hostile response from travel agents. There has been a biblical overreaction by travel agents to this marvellous competition.”

In a letter to agents, Travel Guard North American president Dean Sivley said the campaign “violated the long-established trust we enjoy with our agency partners”.