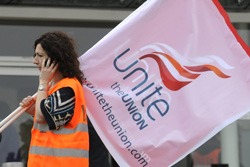 The Unite union has claimed British Airways ran empty long haul “ghost flights” out of Heathrow to keep up the impression that services were running well during the strike.

A union spokesman said 49 flights left from Heathrow after midday without any passengers. The union also claimed only nine crew turned up for work on Sunday out of 1,100, dismissing the airline’s assertion that more than 1,000 crew reported for work.

BA said on Sunday that its contingency plan of using a combination of volunteers and leased aircraft was working well. A spokesman refused to comment on Unite’s claims but said it had been able to reinstate eight long haul and 18 short haul flights, which had been cancelled when the airline drew up plans to cope with the walkout.

The row came as Tony Woodley, the joint secretary of the union, appealed to the airline’s chairman Martin Broughton to step in to aid negotiations.

“I am now appealing to the BA chairman and sensible members of the board to use their influence, put passengers first, and return to the negotiating table for the good of everyone. It is quite obvious this strike is in no-one’s interest. We need a negotiated settlement,” he said.

The first stage of strikes by BA cabin crew is due to end today, but disruption is likely to last through the week.