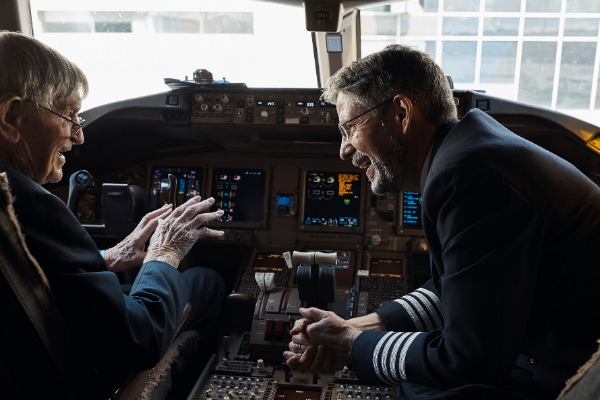 A 96-year-old Second World War veteran and former British Airways pilot has returned to the cockpit some 45 years after retiring.

Frank Dell was able to sit in a cockpit once again as part of British Airways’ commitment to 100 acts of kindness across the world as part of its centenary celebration.

The former RAF pilot flew over Germany in the Second World War before flying for British Airways between 1946 and 1976.

The veteran was born in Hove, East Sussex in 1923, but now resides in a Bupa care home in Sydney, Australia.

He said: “Being a pilot was beyond the reach of average people like me in terms of the cost. Then the war came along and paved the way for me to learn to fly.

“When my time came to be released, there was no job for me in the air force, so I started with British European Airways. It was amazing to see how much pre-war flying and training came into the category of what we were doing then.

“It was a great privilege to work for British European Airways and now, an incredibly proud moment to help them celebrate their 100th birthday and be back in the cockpit again.

“It’s been over 30 years since I was last in the cockpit, and I never thought I’d be here again. While the technology has changed, there are so many things that have stayed the same, and it’s brought back some wonderful memories.”

Frank and his late wife Isabel moved to Australia in 2000 to be closer to their grandchildren. After his wife died, he moved to Bupa’s St. Ives care home in Sydney in 2018.

Reba Hatcher, manager of Bupa St. Ives care home, who put the idea to British Airways, said: It’s so important for us as carers to celebrate the lives and achievements of our residents and to shine the spotlight on what makes them so unique”.