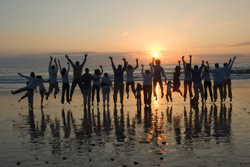 A former boss of Freedom Direct, the large call centre agency in the northeast that failed in April 2009, is poised to launch an online travel agency.

Jackson insisted his new venture was not a replica of Freedom Direct.

He told Travel Weekly: “I am not trying to recreate Freedom Direct. I am definitely not going down that route at all.”

“As a start-up, Freedom Travel Group is a good option as it gives us the Atol cover but without any of the difficulties of doing it ourselves.”

Freedom Direct had about 10,000 bookings when it ceased trading, only some of which were covered by its Atol, but had reported profits of £523,000 for the year ending September 30, 2007.

The company had run into problems renewing its Atol when it was required to provide financial security in the form of personal guarantees. It was unable to take new bookings or balances on existing bookings for a period without an Atol, and subsequently folded.

Jones felt aggrieved that he had bought an Atol, while rivals such as Travel Republic operated without one, against CAA recommendation. Travel Republic was acquitted of any wrongdoing in November. The CAA is appealing.

Hays Travel picked up some of Freedom Direct’s assets when it failed and Jackson became its head of online development.

He left in November, teaming back up with Jones, who has been consulting for northeast-based agency chain Dawson & Sanderson for the past six months.

“I’ve worked with Martin for a long time; he has a wealth of experience,” Jackson said.

“There has been a respectable time-lag [since Freedom Direct ceased trading].

“I am starting to have conversations with suppliers now, but just want to keep my head down and concentrate on developing the business.”

Photo: Beach People features this image on its Facebook page.