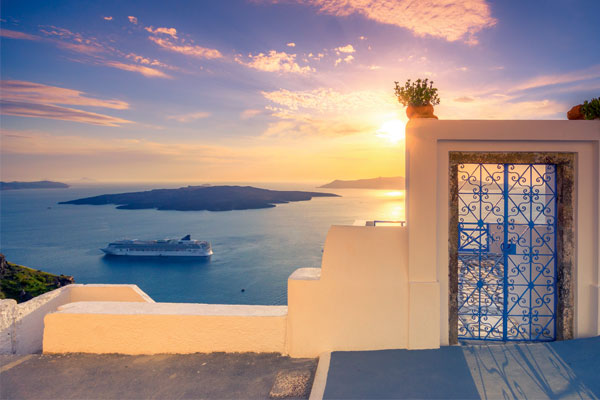 From ziplining to rockclimbing, to adult-only and last-minute sailings, Jane Archer rounds up the best of what’s on offer.

I’m inching around a ledge in search of the mythical minotaur, while preparing myself to take on a giant snake.

Such derring-do is rarely what’s required on a cruise ship, but it’s all part of a scarily real virtual reality maze on MSC Cruises’ new MSC Bellissima – the latest in a list of family attractions cropping on Mediterranean cruises this year.

It’s one of the many features on Bellissima designed to keep kids entertained – they can battle pirates in a 4D cinema, swoosh down towering water slides and test their tightrope skills on a ropes course – and ensure mum and dad have a great time too.

Med cruises know how to please when it comes to family summer holidays – the biggest and best floating resorts are packed with clubs and activities to keep youngsters entertained, while ashore there are beaches, water parks and adventure parks.

Parents will find culture aplenty as cities, including Naples, Venice, Barcelona and Dubrovnik, are right at the water’s edge, while Rome, Florence and Athens are a day trip inland from the ports of Civitavecchia, Livorno and Piraeus, respectively.

Clients can choose from ships based in the Med or sail there on a no-fly cruise from the UK. Best of all there’s always something new to enjoy, as they dock at different ports every day. 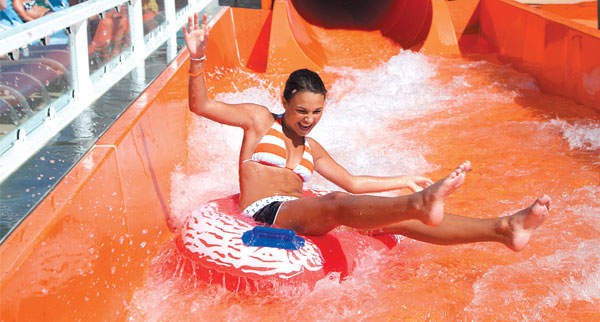 Royal Caribbean International’s Oasis of the Seas – one of the world’s biggest cruise ships – is sailing the western Med from Barcelona this summer and packs in everything from a zipline and swimming pools to FlowRider surf waves, climbing walls and an AquaTheater. There’s a nursery for babies and toddlers, non-stop action for youngsters in the kids’ clubs and a hangout for teens.

Marella Cruises’ Discovery and Discovery 2, sailing the Mediterranean from Corfu and Palma this summer, have rock climbing walls, mini golf, pools and play areas for babies and children.

Disney Cruise Line and Norwegian Cruise Line, meanwhile, have daredevil water slides on ships sailing from Barcelona this summer. Norwegian Epic’s trio of flumes includes the Epic Plunge, a 200ft flume that pitches riders into a giant bowl, while Disney Magic has the AquaDunk, as well as character breakfasts, parties and shows to enthral even the coolest kids.

When it launches in October, Princess Cruises’ Sky Princess will have play areas for kids and teens, a poolside cinema and free popcorn during evening shows. There’ll also be a Sanctuary hideaway for parents, and family suites where mum, dad and the kids can spread out. It’s sailing two voyages in the Mediterranean, then heading off to the US.

The Med isn’t just about kids though. Marella Explorer 2 joined Marella Cruises’ fleet in April and is sailing adult-only cruises round-trip from Naples this summer. The ship isn’t new but has been completely ‘Marella-ised’ in a massive refurbishment.

Among the new features are a golf-themed clubhouse bar, beach barbecue-themed The Beach Cove and Nonna’s, which serves made-to-order pizzas, as well as new champagne bar Flutes and a Champneys spa.

Saga Cruises’ new Spirit of Discovery, reserved for the over-50s, launches in July and sails to the Mediterranean in autumn, visiting Spain, France and Italy on voyages from Southampton. Flamenco dance lessons, Spanish lessons and cooking demos with celebrity chef Kevin Woodford are among the highlights of the 18-night Chic Mediterranean itinerary, departing October 17. 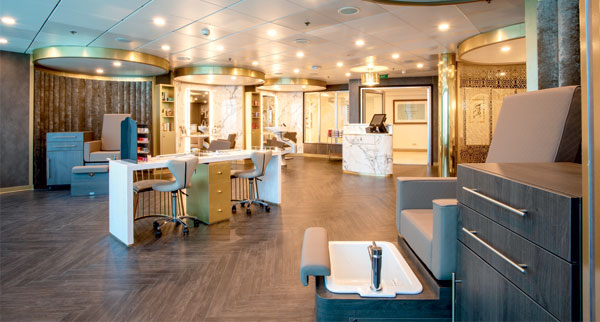 There’s lots more to look forward to in 2020, as Carnival Cruise Lines returns to the Med after a 12-month break.

Carnival Legend is sailing nine to 12-day cruises between Barcelona and Venice from July to October, while Carnival Radiance is visiting Italy, France, Croatia, Greece, Malta and Spain on three cruises from April to June. The ship, currently sailing as Carnival Victory, will be fresh out of the Navantia shipyard in Cadiz with a new water park and tightropes.

Norwegian Cruise Line’s Norwegian Dawn is making its European debut in 2020 with seven to 11-day sailings from Venice to the Greek islands. One of three NCL ships in the Med next year, it’s visiting Santorini and Mykonos, where families can hike up volcanoes, head out on a jeep adventure or spend a few hours on the islands’ beaches.

Royal Caribbean is ramping up the family fun in summer 2020, when Oasis of the Seas is replaced by Allure of the Seas, fresh out of an extensive makeover that will add water slides, a water park for toddlers and more restaurants. 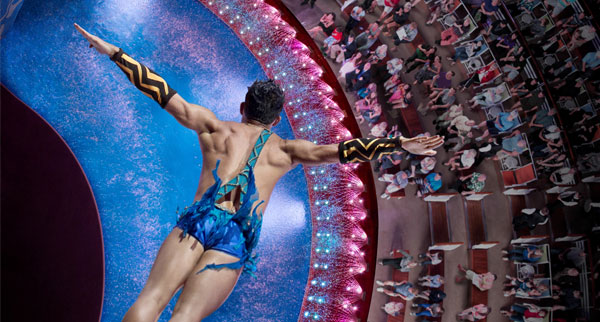 Families have been snapping up Med cruises this year, but there’s still some capacity for those yet to book their summer getaway.

MSC Cruises has a seven-night round-trip voyage from Venice on MSC Magnifica on multiple sailings between August 4 and 31. Cruise-only prices start from £1,149 per adult and £399 per child.

There’s also space on a seven-night sailing from Barcelona to Civitavecchia (Rome) with Princess Cruises on August 10. It ticks off Gibraltar, France and Italy, with prices starting at £3,736 for a family of four, including flights.

On August 11, families can hop on a one-week Greek extravaganza on Norwegian Star. The voyage sails round-trip from Venice and visits Corfu, Santorini and Mykonos. Prices are from £914 per person for a family cabin. 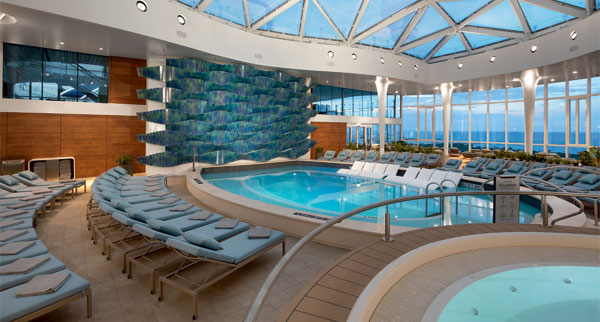 Celebrity Cruises is offering life on the Edge – Celebrity Edge, that is – on a nine-night Western Mediterranean voyage round-trip cruise from Civitavecchia (Rome). Departing July 27, it will be calling in to Italy, France and Spain, with prices from £7,342 cruise-only for four people sharing a cabin.

And high kicks are promised on Royal Caribbean International’s Learn to Dance voyage from Southampton with Pussycat Doll Kimberly Wyatt. The cruise is on Explorer of the Seas from August 18-31, with visits to Barcelona, Marseille and Gibraltar, and costs from £8,556 for a family of four sharing a suite.

Families can also grab some last-minute availability on a 14-night voyage from Southampton to the Med on P&O Cruises’ Azura, departing July 20. The cruise calls in to Cadiz, Barcelona, Monaco and Rome, with prices from £1,199 per adult and £839 per child.

With everything from tapas inspired by Michelin-starred chef Ramon Freixa, to racing car simulators and Cirque du Soleil shows, MSC Bellissima is a ship for all ages.

As glamorous as its Italian godmother Sophia Loren, the vessel holds more than 5,600 passengers and sparkles with Swarovski staircases that cost more than £1.5 million each.

There are inside, outside and balcony cabins that can be combined into one living space for up to 10 people, as well as suites set over two levels.

There’s also a Yacht Club with a private sundeck, pool, lounge and restaurant, where passengers are attended by butlers. A two-storey boulevard has bars, shops, cafes and restaurants, including a steakhouse and Japanese teppanyaki bar.

Clients feeling dazzled by the choice can ask Zoe, a virtual cruise assistant in all cabins. ‘She’ speaks seven languages and can do everything from checking bills to advising on the best restaurants in town

Five of the best family days out

Marella Cruises has a seven-night Magic of Spain cruise round-trip from Palma on Marella Discovery 2. It costs from £1,103, including flights and transfers, departing September 28.

Carnival Cruise Line has a nine-day voyage from Barcelona to Venice on Carnival Legend, departing July 19, 2020, and visiting Marseille, Livorno and Naples, from £959 cruise-only.