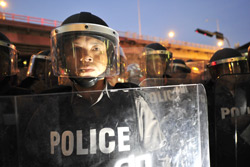 The Foreign Office has warned against all but essential travel to Bangkok after grenades exploded in the centre of the Thai capital yesterday.

Three people were killed and 75 wounded, including four foreigners, when five explosions occured near the site of anti-government protests.

The FCO reviewed its advice in light of ongoing political demonstrations and outbreaks of violence in city. The advice does not apply to passengers passing through Bangkok airport on their way to other destinations in Thailand or internationally.

It is thought the blasts were caused by grenades, but it is not yet clear who fired them.

Witnesses said the explosions occurred at an elevated train station in the heart of the capital’s business district.

Hundreds of pro-government demonstrators were staging a rally to call for an end to protests by the anti-government Red Shirts.

The Reds, who have been protesting for weeks, say the current government is illegitimate and want current Prime Minister Abhisit Vejajjiva to step down.