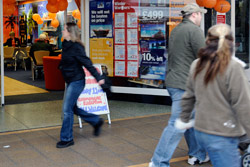 The high street and package holidays increased their share of the market last week as the volcanic ash crisis closed all UK airports, official industry figures have shown.

According to GfK Ascent-MI, the official collator of travel industry booking data, shops increased their market share by 10 percentage points and share of package bookings by eight points.

Sarah Smalley, GfK Ascent-MI managing director, said: “There was a swing back to shops last week as customers went to travel agencies because they needed advice and wanted to talk to someone face to face.”

The true impact of the crisis on volumes of new bookings remained unclear this week, with Ascent still working on its data to strip out the impact of rebookings and amendments.

Many agents have described it as the worst crisis they have experienced, with 44% of respondents to a Travel Weekly homepage poll calling it ‘the hardest period of my working life’.

The Co-operative Travel said new bookings at the start of the flight ban were down by up to 60%.

Air fares are also tipped to rise. Price comparison website Kelkoo has released research carried out by the Centre for Economics and Business Research that suggested air fares would increase 5.2% in 2010 due to rising oil prices – up 74% in the first quarter of 2010 – and the ash crisis.

The overall cost to the aviation industry of the six-day flight ban is now estimated at £1.7 billion, two-thirds of which is being borne by EU airlines, which by law
must compensate customers.

Kelkoo managing director Bruce Fair said airlines already struggling before the ash crisis would have to pass on the increased costs to customers.

“Operating profit margins turned negative in 2009, with losses reaching 3.4% of revenues and exceeding the slump experienced after the September 11 terrorist attacks.

“In 2010, it is expected that profitability will remain negative, giving the industry little room to adjust prices downward,” he said.

The future of the high street