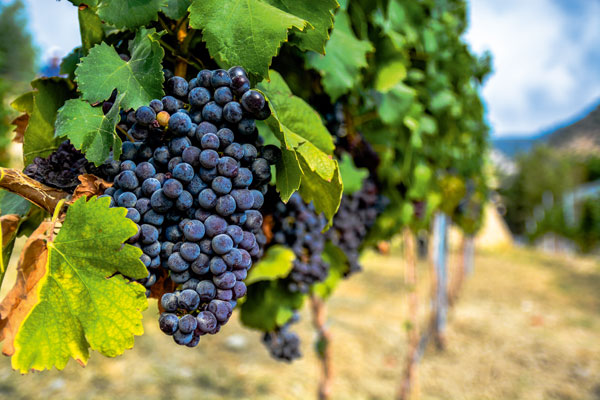 The wine scene in Cyprus is having a renaissance, reports Sarah Bridge.

There has been a revolution in wine in Cyprus,” declares winemaker Charilaos Athenodorou, while sloshing a zesty white morokanella in a glass and handing it to me to taste. “In 10 years’ time, the wines in Cyprus will be as well known as the wines in Italy.”

Charilaos – whose winery, Ktima Gerolemo, has a sign in the cellar that reads ‘Wine is bottled poetry’ – is not alone in his optimism. Cypriot wines have undergone a transformation over the last couple of decades and the quality is expected to improve even further over the next few years.

That Cyprus, the third-largest island in the Mediterranean, has an impressive wine heritage should not come as a surprise. The country is one of the oldest producers of wine in the world, going back 5,500 years. What might surprise people is the quality of its wines, which are rapidly gaining in reputation – and awards – beyond its shores.

A disastrous attempt to compete with the likes of France and Italy in the mid‑20th century saw native Cypriot vines ripped up and replaced by better-known varietals such as cabernet sauvignon and chardonnay, leading to a dramatic decline in the country’s output. But following a shift in policy, and with the help of EU investment and private finances, there are now more than 40 wineries in Cyprus. Many are family-owned and some are run by a younger generation who have studied oenology overseas and returned to test their new-found know-how. 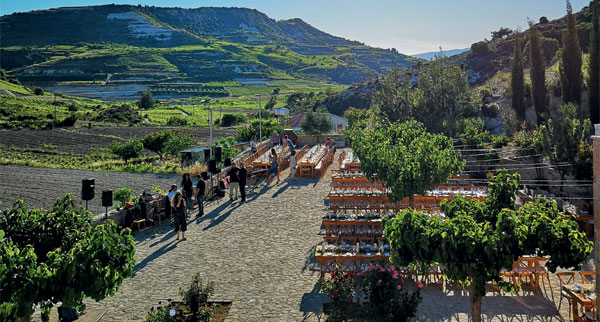 To show off the growing number of vineyards scattered across the island, seven self-drive wine routes invite wine lovers to discover these sites for themselves. Many producers are delighted to show off their wines and offer tastings and tours, and oenophiles used to trawling round more-established wine regions such as Tuscany or the Loire Valley will love the feeling of discovery as they find a winery tucked away at the end of a dusty track.

A good place to begin is the ancient city of Paphos, where even before you set foot in a vineyard you can find traces of Cyprus’s wine history in the unmissable Roman mosaics featuring Dionysus, the god of wine.

Most of Cyprus’s vineyards are spread across the southwest part of the island, with vines stretching over the green countryside and up steep terraces all the way into the Troodos Mountains.

Indeed, if all the sampling gets too much, Troodos, known as ‘the green heart of Cyprus’, has miles of walking and cycling trails, while the sandy beaches around Paphos are worthy of legend (literally – as the goddess Aphrodite was supposedly born here).

Driving through the lush green landscape, with vines stretching as far as the eye can see, is doubly rewarding if you’re en route to sample the wine (and even better if you hire a taxi for the day).

I headed off on wine route number two – you can mix and match between routes, depending on where the mood takes you – to Vouni Panayia, a producer keen on promoting indigenous grapes rather than foreign imports. One winery tour later and unfamiliar grape varietals such as maratheftiko, spourtiko and giannoudi were tripping off the tongue, while I was poured a glass of the bestselling Alina wine from one of Cyprus’s most widely planted white grapes, xynisteri, which makes a great sauvignon blanc-style wine. 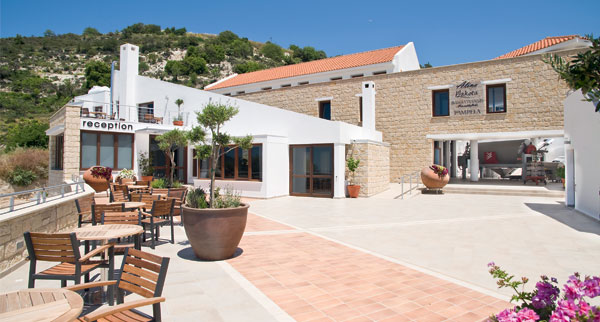 Fired up by a bracing shot of fortified wine Zivania, I headed for the village of Kathikas and the Vasilikon winery, one of the first to be established in western Cyprus. Surrounded on all sides by vines, the winery is built on three levels, encompassing a wine museum, tasting room and wine laboratory, and hosts generous tastings from across its range of reds, whites and rosés.

It was at my next stop, the aforementioned Ktima Gerolemo winery just outside the beautiful village of Omodos, where I finally sampled – among many others – Cyprus’s famous commandaria sweet wine. Made from grapes left out in the sun, the result is a deliciously sweet – but not too sweet – gloopy glass of delight, all raisin and caramel with sherry overtones. For visitors who wish to dig deeper, the 15th-century Kolossi Castle near Limassol is the home of commandaria wine and worth a visit.

Having tried several more glasses in the sunshine, I couldn’t resist buying a couple of bottles to take back with me – so be warned, it’s best not to have just hand luggage on the journey home.

Cypriot wines are exported principally to Russia, Germany, Switzerland, Poland and even France – validation of its quality, if ever it were needed. But with just a few million bottles produced on the island each year, if you want to experience the full variety of Cyprus wines, you have to actually go there. Thankfully, that’s not a hardship.

The Cyprus wine routes were plotted to introduce visitors not only to the 40-plus wineries on the island but also to show off the culture of wine-making in Cyprus, including museums, restored wine presses and villages rich in wine history.

There are seven routes, marked by special road signs, all in the southwest of Cyprus. Each route showcases a different side of the island, from its mountains to its coastal roads. Visitors with a taste for sweet wine should choose the commandaria route, centred around the island’s most famous tipple, which has been made here for centuries.
visitcyprus.com

Halloumi: Forget the squeaky, plasticky supermarket version: in Cyprus, you’ll find halloumi that is soft, doughy and utter heaven. Visitors to Mrs Sofia’s house in the tiny village of Letymbou can watch halloumi being made by hand and then taste it with freshly baked bread.

Coffee: Mrs Sofia is also a dab hand at Cypriot coffee made the traditional way – heated on hot sand and with the grounds poured into the cup to make a strong, sweet drink. Just remember to stop drinking before you reach the end.

Sweets: A popular traditional Cypriot sweet is soutzoukos, made with xynisteri grape juice and aromatic plants and allowed to thicken into a soft, rubbery treat.

HF Holidays’ seven‑night Cyprus Discovery Tour includes wine tasting at a monastery, a tour of wine cellars around Omodos, plus visits to Paphos and the Akamas Peninsula. Prices start at £899 based on a February 2, 2020, departure, with four-star accommodation, excluding flights.
hfholidays.co.uk

Olympic Holidays offers a week at five-star hotel Anassa from £1,681 based on two sharing on a B&B basis, travelling from Gatwick on September 3. Car hire starts at £100 for a week.
olympicholidays.com