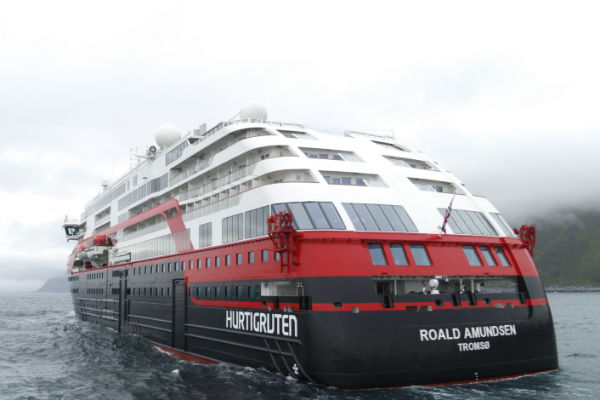 Hurtigruten has revealed that its new battery-powered ship will officially be named in Antarctica in the autumn.

In a break from tradition, the polar expedition line will name the 530-passenger vessel using a block of ice rather than smashing a bottle of Champagne on the side of the ship.

The exact date for Roald Amundsen’s naming ceremony is yet to be announced.

Hurtigruten chief executive Daniel Skjeldam said: “We can think of no better place to name the truly unique Roald Amundsen than the waters of Antarctica – where no ship has ever been christened before.”

The ship is named after Norwegian explorer Roald Amundsen, who led the first expeditions to the South Pole and the North Pole.

The vessel’s naming ceremony is designed to honour Amundsen, who used a chunk of ice when naming his expedition ship Maud in 1917, rather than a bottle of Champagne.

The line has not yet revealed who will be the ship’s godmother.

The ship’s maiden voyage departure port was moved from Hamburg to Tromsø last month after the line delayed the sailing by a week.