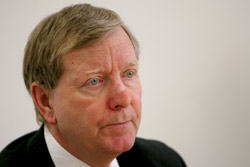 Advantage is confident of a positive outcome of talks with the CAA about becoming a franchisee Atol holder.

It could operate a model similar to the one pioneered by the Travel Trust Association.

John McEwan, Advantage chief executive, said the plan, if approved by the CAA, would allow it to offer all members a trust account facility.

Speaking to Travel Weekly earlier this month, Simon Hargreaves, TTA Worldchoice managing director, predicted there would be consolidation in the sector, with the possibility of the TTA forging alliances with other groups for which it could run trust accounts.

He doubted whether any other agency group had the history of running such potentially risky schemes.

But McEwan said he was confident an agreement with the CAA could be reached, although he added that discussions with the CAA were at an early stage.

“We already have Advantage-managed services, which is a reasonably new initiative where we run back office accounting for members. That’s all done through a trust accounts process,” he said.

“The other dimension we are talking to the CAA about is Advantage becoming almost a franchisee trust account operator on behalf of the CAA.

“That would enable us to offer a trust account facility across the membership.”

Trust accounts have long been resisted by Abta, the trade body of which McEwan is also chairman, because they have historically been regarded as open to abuse and fraud.

However, the TTA model, endorsed by the CAA through its T-Atol franchise, is based on individual trust accounts for members which have co-signatories independent of the travel agent and TTA management.

The association claims the system is so watertight no customer or supplier has ever lost money dealing with a TTA agent. The main downside for agents is that it can limit cash flow.

Asked about Hargreaves’ prediction of consolidation in the independent sector, McEwan said he would not rule it out but it was not something currently under consideration.

“Consolidation is inevitable in any industry, but we are in a good position and we are making good progress independently and we have no plans to consolidate. But you can never say never,” he said.

“If something came along which was highly beneficial we would have to consider it but at the moment there is nothing we are looking at.

“It’s not a question of buying or selling because we would not sell but if there are areas of cooperation between different groups or consortia that added value to both, clearly we would work together.”

McEwan added: “We are in a position now where I think the industry has matured quite a lot. We respect the other organisations out there and have good relations with TTA Worldchoice.

“We already work with aspects of TTA Worldchoice in that we have a financial services company and we provide some of their members with financial services products. If there was an opportunity to move that along I would not be averse to that.”

The prospect of consolidation in the independent travel agency sector is nothing new.Triton, the super-consortium, was formed in 2006 from an alliance of Advantage, Global Travel Group and Worldchoice.

But this fell apart in 2008 when Advantage left Triton, although this followed speculation – denied by Advantage – that it had been in talks about being bought by Global parent Stella Travel Services.

Stella did try to buy Worldchoice but was thwarted when TTA came in with a late bid which was accepted by Worldchoice shareholders.

Worldchoice continued to be a member of what remained of Triton, but TTA decided not to join and the super-consortium has now morphed into a looser group called the Federation of Independent Travel Agents.