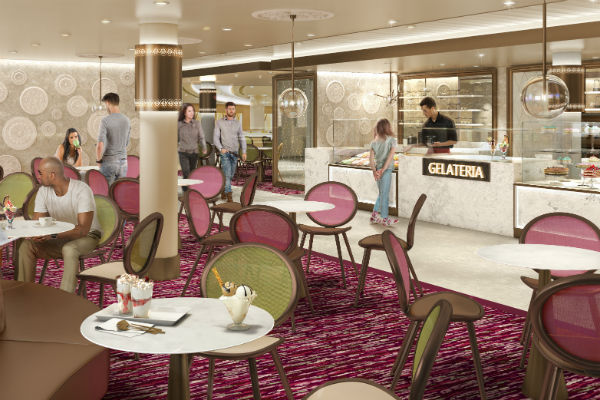 P&O Cruises aims to create a street food atmosphere with a range of options for families to eat on new ship Iona.

Taste 360 is a new concept offering street-food-style dining on deck.

A multi-venue dining piazza called The Quays will offering a series of eateries and restaurants ranging from a US-style diner, Asian take-away, fish and chips and Mediterranean sharing platters.

Italian-style gelato will be available at an outlet at the top of the ship’s atrium leading into The Quays.

The previously announced four-screen cinema complex will be called Ocean Studios with screenings throughout the day of age-appropriate blockbusters and family classics.

The 5,200-passenger ship, which enters service to the Norwegian fjords from Southampton next May, will also feature The Club House where families can play games and enjoy entertainment and game shows; a range of swimming pools, family-friendly shows in the Headliners Theatre and pop-up performances, including aerial and circus performances, in the Grand Atrium and SkyDome.

The Reef onboard activity programme will cater for children aged six months to 12 years while Scene will include the latest gaming technology for those aged 13 to 17. The ship will also have a night nursery.

All family-friendly cabins have been designed to maximise space by day and create flexible sleeping arrangements at night, according to the line.

P&O Cruises president Paul Ludlow said: “It’s not easy finding a holiday that caters to everyone’s needs and when you’re travelling with children, your happiness depends on theirs.

“We believe we’ve come up with the perfect solution – unprecedented choice and flexibility when it comes to dining as well as a fun and welcoming environment so parents can relax and recharge while the kids have the time of their lives. Iona really is the ultimate family holiday.”