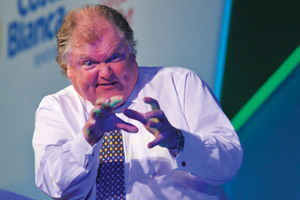 The travel industry’s hopes of setting up a government-backed national skills academy to promote training and education in the sector may have to be shelved.

That prospect coincided with a damning judgement of the UK’s school-leavers by business expert Lord Digby Jones, who said it was a “national disgrace” that so many would leave school at 16 with a poor grasp of maths and English.

Members of an industry committee set up to bid for funding for the academy now accept that swingeing public spending cuts almost certainly mean there will be no government money on offer.

The only option now could be for the industry to find the funds itself.

The travel industry failed to gain approval for an academy in the last round of bidding in 2009, but even those that were approved are thought unlikely to go ahead as public spending is reined in.

The sector academy committee is due to meet next month and must decide whether to progress the idea and how to fund it.

National Skills Academies were an initiative set up by the former Labour government to provide centres of excellence to improve skills. To date, 14 have been approved, including in the hospitality, retail and sport and active leisure sectors, and they are joint-funded by the government and private business.

Claire Steiner, consultant chairman of the ITT education and training committee, said: “If we want to take control of the whole skills initiative, we need to come together.

“In the future, we are going to be competing globally for qualified people due to a fall in the number of young people coming into the workplace, and we need to bring the skills base up.”

“We have a very dirty secret,” he said. “This month, after 11 years of full-time, compulsory, free education, children in the UK will take GCSEs – but half of them are not going to get above grade C in English and maths.

“Half the children are not fit for the world of work. It’s an absolute disgrace.

“One in five of the adults in this country cannot read to the standard expected of an 11-year-old; 20% of adults are illiterate; 30% of adults cannot add up two three-figure numbers, and yet 75% of all jobs in Britain require you to be computer literate.

“Take on India and the US? We haven’t got a prayer. We have got to take the whole economy on to a higher skills base where knowledge is the one thing we have got to have.”

Jones said the travel sector offered young people a “wonderful lead in to the world of work.

“Exposure to other cultures is probably the best way to achieve a safer world and makes an enormous contribution to people getting on with each other.”