‘Smile, and the world smiles with you’, so goes the saying.

Marella Cruises is taking it quite literally and has appointed a head of nautical smiles.

Nic Spanoudis has been tasked with infecting his gleaming smile on staff and passengers.

His first job was working with resident psychologist and smile expert, Emma Kenny, to create a smile induction video that will become part of the line’s staff training programme.

Research conducted by Kenny on board Explorer 2, found that 83% of guests smile 60 or more times a day.

Spanoudis, who is also general manager of Marella Explorer 2, said: “Undoubtedly, the most satisfying part of my job is seeing happy guests and happy crew. Emma’s research shows just how happy people are on-board our ships and that’s because they really become part of our on-board community.  I am looking forward to our smile induction video rolling out so we can all deliver more smiles per nautical mile.” 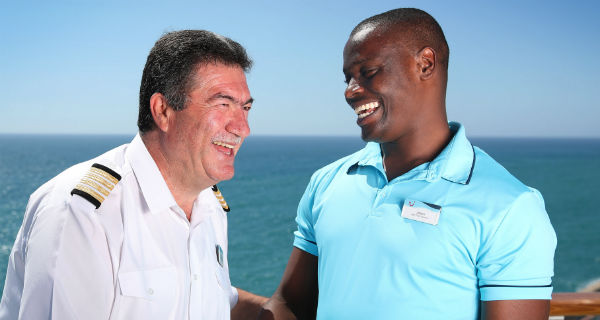 Kenny said: “The interaction of strangers was high and passengers appeared to engage with new people consistently.

“From a psychologically observant position, it is inescapable to note the optimism level on-board appeared higher than in the general population. There was an altruistic climate, resulting in a really positive atmosphere.”