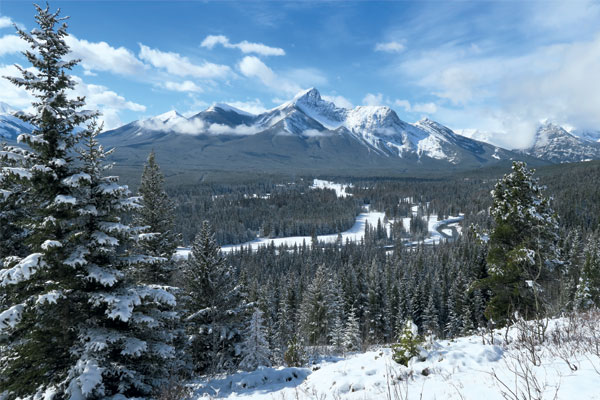 Katie McGonagle embarks on a rail adventure with Rocky Mountaineer.

There was snow on the ground and a chill in the air as I stepped out of Kananaskis Mountain Lodge for an early morning stroll along the scenic footpath that passes just behind the hotel.

Lost in thought, I missed the signpost for the Village Rim Trail and ended up in the hotel’s staff car park – not quite the view I’d been expecting – and contemplated turning back in favour of hot coffee and a spot by the fire.

“It’s only five minutes away,” the concierge had told me. “And the view is beautiful.” So I retraced my footsteps to the trail, and just moments later I rounded a corner and the sweeping snow-covered landscape of Kananaskis Valley came into view. It was definitely worth persevering.

Despite the unseasonable snowfall overnight, it was a bluebird morning – all bright blue skies and white, fluffy clouds draping themselves across the upper slopes of the mountains, snow-tipped pines lining the hillsides that rushed down to the winding path of the Kananaskis River. 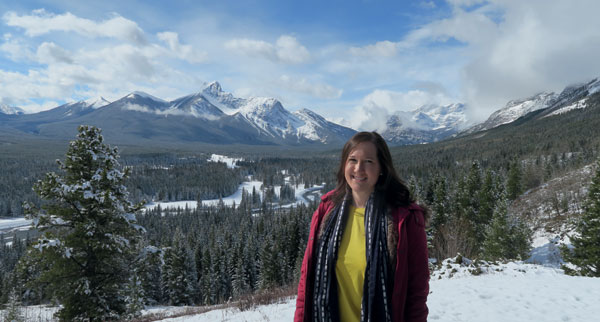 I set off along the deserted trail, boundless valley views to one side and dark, inviting woods to the other, past a deer basking in a patch of sun and the occasional flash of movement between the trees.

With no other soul in sight, I couldn’t help but think of the Robert Frost poem, Stopping by Woods on a Snowy Evening: “The only other sound’s the sweep of easy wind and downy flake.” Except I could add the gentle padding of my feet over powdery snow, the occasional rustle as a breeze swept a small flurry of flakes off the branches, and the deep, throaty caw and high-pitched chirp of birds calling to each other across the treetops.

I probably should have been used to views like this after two days on board Rocky Mountaineer, often named the most scenic train journey in the world, but this kind of raw, untouched terrain never fails to take your breath away.

It’s why Kananaskis was one of four destinations introduced by Rocky Mountaineer this year as self-drive add-ons to its regular rail routes – alongside Canmore, Sunshine Village and the Cariboo Mountains – complementing time on the train with a chance to pause and appreciate the region’s rugged beauty.

We had plenty of scenery in store as we gathered at the Rocky Mountaineer station in Vancouver, ready to set off on two-day journey The First Passage to the West.

There was an air of anticipation among the other passengers – all 689 of them – as a bagpiper set the scene and we boarded one of the new GoldLeaf cars.

Warn clients to expect early starts as Rocky Mountaineer travels only in daylight hours, spending nights off the train – all the better to enjoy the breathtaking views.

It didn’t take long to escape Vancouver’s industrial outskirts and get our first glimpse of green, backed by the distant peaks of the Cascade Range across the border in Washington. Even before reaching the scenic heart of the Rockies, the landscapes offered a kaleidoscope of greens and greys, from the bright emerald of new-growth trees and soft grasses that line the edge of the Fraser River to the deep forest pines blanketing the hillsides and sheer grey rockfaces criss-crossed with scars from falling boulders. 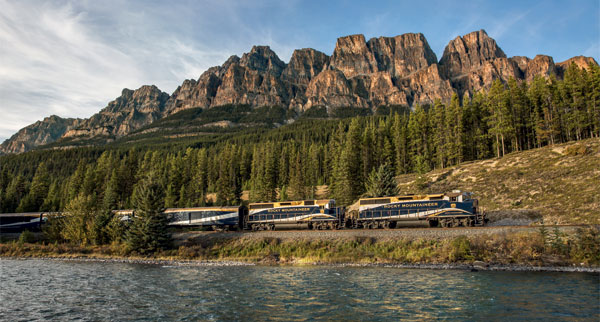 It’s impossible not to think of the single-minded determination it must have taken those early engineers to drive a railroad track through this unforgiving terrain. While Rocky Mountaineer is just 29 years old – it will mark its 30th anniversary next May – the Canadian Pacific Railway is much older, completed in 1885 as part of a pledge to unite east and west.

The train passes through Craigellachie, where the last railroad spike was driven into the ground, completing the transcontinental connection. But you don’t have to be a rail geek to be touched by stories of the Chinese workers drafted in to build the most hazardous sections of track – two men died for every mile that was laid – or the marvels of engineering that let 19th-century labourers traverse gaping canyons or tunnel through solid stone.

That curious juxtaposition of industry and environment becomes a recurring theme, with the ultimate in wild, untamed nature sitting side by side with the ultimate in engineering. Freight trains, timber yards and trucks trundling along the Trans-Canada Highway are just as common a sight as sweeping views of untouched scenery, but it doesn’t detract from the journey. If anything, it adds to travellers’ appreciation of what it took to bring them this close to nature. 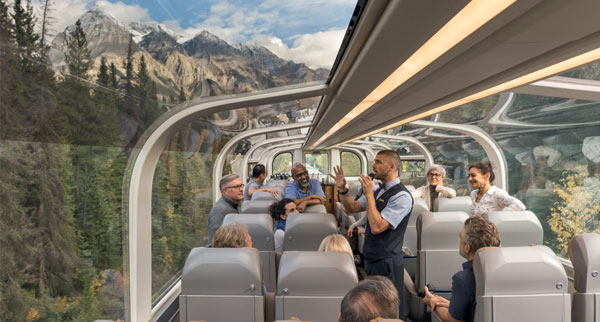 After a night at the Sandman Signature Kamloops Hotel, we were back on board at 7am, cameras at the ready, to enjoy the impressive stretch through the Rockies.

I darted back and forth between the open-sided observation car – which felt more connected to the landscape and made for better photos – and the comfort of the glass-domed carriages with their huge, panoramic windows.

The latter was better for wildlife sightings, sitting higher up, with the advantage of a running commentary from our excellent hosts, Holly and Jocelyn. They pointed out the bighorn sheep high on a ridge to our right, the eagles and ospreys overhead, and the black bear sitting motionless among the grass, which I might otherwise have mistaken for a particularly fuzzy boulder.

But it was the shout of “grizzly on the right” that evoked the most excitement, as the huge, hulking shape of a bear emerged from between the trees.

Like all wildlife sightings, nothing is guaranteed, but it might reassure clients to know that spotting these animals was more like the icing on a very scenic cake. Even if they don’t see any wildlife, the landscapes alone would make the trip worthwhile.

Our journey had taken us from the bright blue glacial waters of Kicking Horse River to the dark, brooding mass of Castle Mountain, over yawning valleys with steep-sided banks and past craggy rockfaces smoothed over with snow. As we pulled into Banff, a few snowflakes floated in through the open sides of the viewing car. Our rail adventure through the Rockies had taken these grand landscapes and brought them within touching distance – and that never fails to amaze.

“I love the Spiral Tunnels, because it’s such an engineering marvel for the early 1900s. It’s a beautiful location and a fascinating part of history so everybody gets really excited.

“My advice for travellers would be to pack layers and be ready for any type of weather, and as much as you want to capture everything on film, don’t constantly have the lens between you and what you’re seeing. Spare a moment to take it all in – even the changing greens of the trees and the landscapes are beautiful to see.”

Stanley Park: Vancouver’s green lung is even bigger than Central Park. Walk or cycle its 5.5-mile sea wall and stop off to see its First Nations totem poles.

Bow River: The gentle walk along Banff’s riverside trail to the famous Banff Springs Hotel is an easy option for beginners and offers a crowd-free experience.

Banff Gondola: Take the gondola up Sulphur Mountain for incredible views and great food at the Sky Bistro restaurant. 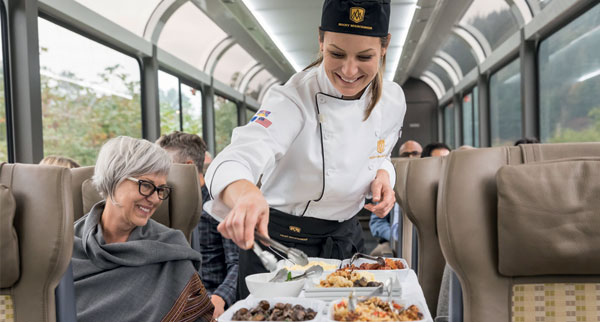 The impeccable service on Rocky Mountaineer and top-quality dining are as key to the experience as the scenery. In two-level GoldLeaf carriages, snacks and drinks are served to the seat, but breakfast and lunch are in the downstairs dining car. In SilverLeaf, everything is served at the spacious seat. Meals are outstanding, with Canadian ingredients such as Pacific prawns and Alberta beef, a great choice of dishes and a finish so professional, it’s hard to believe it has come from a galley kitchen. A higher-spec kitchen is just one of the features of Swiss-built new GoldLeaf carriages, with seven added this season and three joining the fleet next year. They include dimmable domed windows, smoother suspension and an even more spacious seat that reclines, has lumbar support and spins 180 degrees so travellers can chat to their neighbours.

The Eight-day First Passage to the West at Leisure starts at £2,419 in SilverLeaf and £3,258 in GoldLeaf, including two days on Rocky Mountaineer, seven nights’ accommodation, some meals and activities including an Icefields Parkway Tour and helicopter flight.
rockymountaineer.com