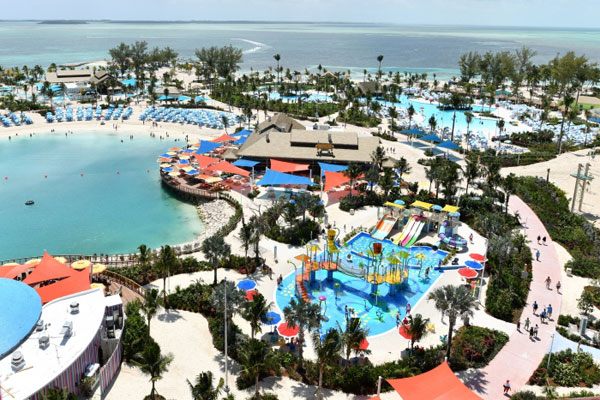 The oncoming Tropical Storm Dorian has forced Royal Caribbean International to shut its Bahamas private beach resort for a week.

CocoCay will be closed until September 4 with all 400 staff evacuated.

The decision was taken due to the “current strength and path projections” of Dorian, which has intensified into a hurricane.

The line is providing refunds to pre-booked excursions on cruises which had been due to visit CocoCay.

“We evaluated all options, and this is the best decision, as there is no room for error when it comes to the safety and security of our guests, crew and employees,” Royal Caribbean said.

The shutdown came as Dorian was upgraded into a category one hurricane as it missed the main island of Puerto Rico, with projections that it could strengthen further before making landfall in Florida.

But the US territory’s smaller islands, Vieques and Culetra, were struck by heavy rain and high winds.

While Dorian is less powerful than the hurricanes that hit Puerto Rico two years ago, it is expected to gather strength in the coming days, and is on course to reach the US states of Florida or Georgia by the weekend.

The Foreign and Commonwealth Office said in updated travel advice for the US: “Hurricane Dorian is tracking across the tropical Atlantic and is expected to make landfall early on Monday 2 September along the US south-east coast.

“You should monitor the progress of approaching storms on the US National Hurricane Center and follow instructions issued by the local authorities, including any evacuation orders.”

Florida declared a state of emergency yesterday with governor Ron DeSantis saying it was “important for Floridians on the east coast to monitor this storm closely”.

However, forecasters say is too early to say exactly where or when Dorian could arrive as it intensified to reach peaks of 85mph last night.

Dorian is now forecast to approach the Florida coast as a major category 3 hurricane with 115mph winds ahead of a US public holiday on September 2.

“All indications are that by this Labor Day weekend, a powerful hurricane will be near or over the Florida peninsula,” the US National Hurricane Centre warned.

Dorian packed winds of 72mph as it passed over St Thomas with a lesser effect on St Croix in the US Virgin Islands. An all clear was declared in the British Virgin Islands with damage assessments underway.

BVI governor Gus Japsert said: “We have safely made it through the direct passenger of what started out as a tropical storm and quickly strengthened into Hurricane Dorian, with no reported loss of life or limb. The hurricane warning that was previously in place has been lifted.”

But he warned of the potential for “severe flooding and damage to property and livelihoods” with an overnight curfew in place until 6am local time this morning (Thursday).

Meanwhile, the Foreign and Commonwealth Office said: “Tropical storm Dorian is no longer forecast to hit the Turks and Caicos Islands but may still pass nearby; you should exercise due caution and monitor local news and weather reports.”