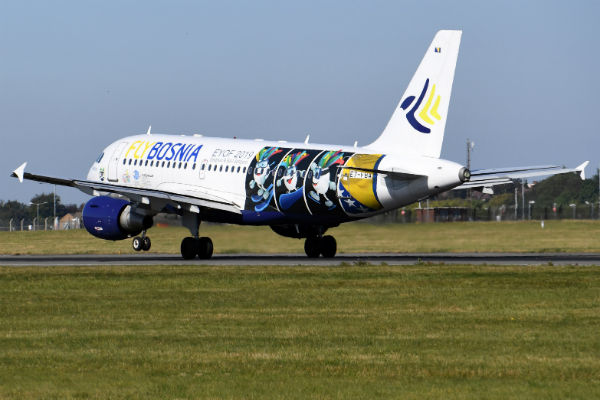 More than 100 travel agents flew to Sarajevo on the first flight by FlyBosnia from Luton airport.

The airline started serving the capital of Bosnia and Herzegovina yesterday – the first direct air link to the city from the UK in more than a decade.

Three flights a week will run from September 24 on Saturdays, Sundays and Tuesdays with promotional fares starting at £18.99 one-way.

The agents will be visiting Sarajevo and other attractions in the region, including the historic city of Mostar.

The airline’s CEO Tarik Bilalbegovic said: “FlyBosnia has ambitious plans for expansion and London is a key destination for us, as our first European destination – other European cities will be following closely behind.”

Luton airport chief commercial officer Jonathan Pollard added: “We are delighted that FlyBosnia has chosen London Luton airport as its UK base.

“This is the first and only direct flight to Sarajevo to operate from any UK airport in over a decade so we are delighted to be part of this success.”

Vanja Filipovic, Bosnia and Herzegovina’s ambassador to the UK, said: “This is a wonderful opportunity to open up tourism to my country, as well as strengthening commercial links with the UK.

“I am sure that the travel agents, media and other guests on the inaugural flight will have a wonderful time exploring Bosnia and Herzegovina and we look forward to welcoming many more British visitors to our country from now on.”