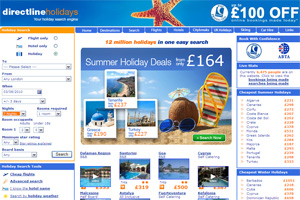 Online travel agency Directline Holidays has refused to comment on speculation in the weekend papers that it is up for sale with a potential £40 million price tag.

The Croydon-based retailer, which is a member of the Advantage Travel Centres consortium, was said to have asked accountants KPMG to find a buyer.

The Sunday Times reported that a previous attempt to sell the firm was put on hold two years ago due to the recession but that founders Matthew Flint and Antony Bradley were making a “fresh attempt”.

Directline has refused to comment on the speculation saying it has had a number of offers in the past as a potential acquisition target.

Flint and Bradley set up Directline in 1992 and have grown the business since then to become one of the UK’s largest independent online travel agencies now employing 60 people.

The founders took a step away from the day to day management of the business last year when it employed Maria Whiteman, formerly of the Holiday Team and Travel 2, as chief executive.

Reports said a number of investors have shown an interest in the company and that talks have taken place with management to help them understand the business.