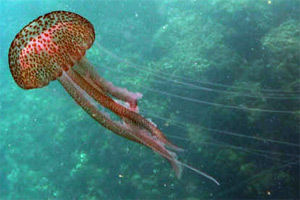 A plague of ‘stinger’ jellyfish has forced the closure of Spanish beaches at the height of the summer season.

Swarms of the Mauve Stinger jellyfish have reportedly spread across Mediterranean beaches.

Several beaches on the Costa Blanca north of Alicante were closed to swimmers.

The Spanish environment ministry has deployed boats to patrol the coastline to search for dangerous clusters of the bright purple creatures.

Red flags will be raised to warn swimmers to stay out of the water when the jellyfish are spotted.

Posters have been positioned on beaches across Spain advising bathers of the danger and how to treat jellyfish stings.

The tentacles of the purple jellyfish deliver mild stings but can cause severe allergic reactions in some people even leading to heart failure, according to reports.