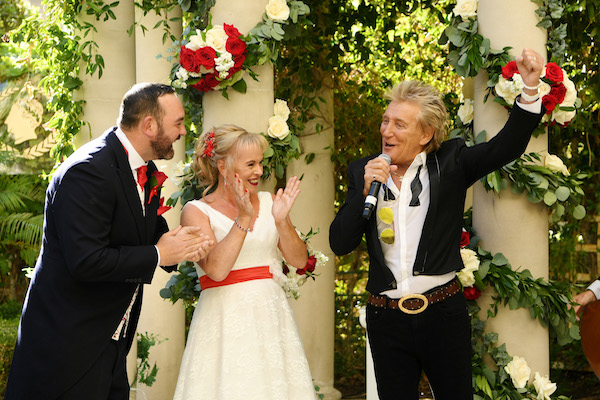 Rock star Sir Rod Stewart sang at the Las Vegas wedding of Sharon Cook and Andrew Aitchison who had seen their dreams shattered by the collapse of Thomas Cook.

The bride and groom had faced cancelling their ceremony at Caesars Palace Hotel and Casino as the travel giant ceased trading on September 23, less than a week before they were due to fly out to the Nevada resort.

However, Caesars Palace and Delta Air Lines stepped in to throw “the wedding of a lifetime” and the Liverpool couple exchanged vows, along with friends and family, at the resort’s Venus Garden Chapel on Wednesday (October 2).

Sir Rod – the resident headliner at Caesars Palace’s concert venue, The Colosseum – sang for the couple, accompanied by a guitarist and two violinists.

He personally invited the entire wedding party to celebrate at his Colosseum show Rod Stewart: The Hits.

The Liverpool couple, along with 14 friends and family, had flown out in Delta business class on Sunday (September 29), departing from Heathrow.

Shane Spyak, Delta’s staff vice-president for sales and JV integration, Europe, Middle East, Africa and India, said: “Going above and beyond is one of our values, and the way the teams pulled together to help Andrew and Sharon is a prime example of this.”

Andrew Aitchison said it had been a rollercoaster since the Thomas Cook collapse.

“On Monday, we lost everything for our dream wedding in Vegas. Then Wednesday morning Delta called to say they would help us,” he said.

“They brought our dream back. It’s just been incredible.”

More: Flight crew step in to save wedding booked with Thomas Cook