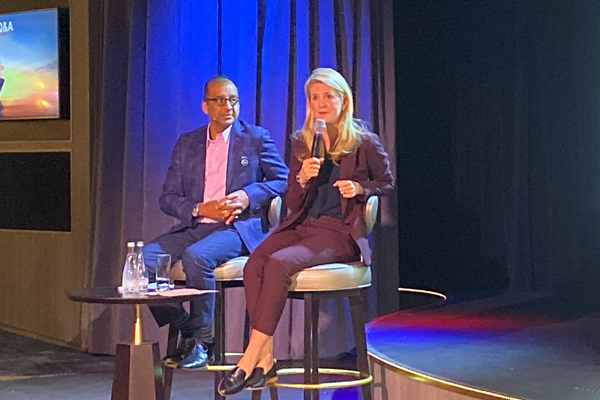 Princess Cruises claims it has rolled out the “best WiFi at sea” which will help attract new-to-cruise passengers.

Princess Cruises has fitted nine ships with Medallion Net WiFi so far and plans to complete rolling it out across its fleet by July next year.

The WiFi will power the line’s Ocean Medallion technology, which is fitted on new ship Sky Princess.

Speaking on board the ship during its shakedown cruise from Trieste to Athens, Prag Shah, the line’s global head, experience and innovation, said: “One of the biggest detractors people have of cruising – like the younger generation – is that they cannot be connected as well as on a land-based holiday.

“Millennials always like to be posting and sharing their experiences with everybody.

“We wanted to make connectivity on board better and a lot of effort and creativity went in to do that. From a cruise standpoint, being able to promote and sell longer cruises brings another type of cruiser into the equation.”

John Padgett, Carnival Corporation’s chief experience and innovation officer, addressed media and travel agents via the internet to demonstrate the connection strength on the new vessel.

He said: “There are no longer any sacrifices by coming on a cruise vacation. Cruise holidays have been an amazing value for years, but you have tended to sacrifice this feeling of connectivity.

“There are no longer any sacrifices there. We are the only cruise line that offers anything like this. I want you to use as much bandwidth as you like because that makes your experience better.”

Padgett told the audience Medallion Net, which costs $9.99 per day, as the “best WiFi at sea”.

Sky Princess is the first of the line’s vessels which was built with Ocean Medallion. Several guest services, including ordering food and drink anywhere on the ship, locating friends and family, and navigating your way around the vessel are available through the wearable technology.

The line has retrofitted four of its existing ships with Ocean Medallion.

When asked what developments would be made to Ocean Medallion technology going forward, Shah said: “Personalising [Ocean Medallion] is going to be where we are putting a lot more focus [in 2020].”