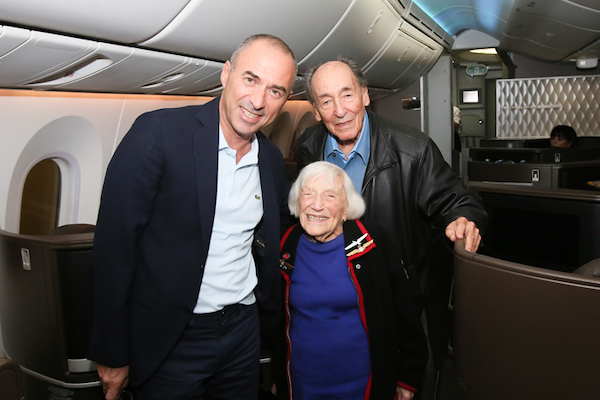 Marthe Cohn, 99, who was a French Jewish spy in the Second World War, has flown with El Al to Israel for the first time, to see a documentary film about her extraordinary life.

Her story told in Chichinette – How I Accidentally Became a Spy, which had its world premiere at the Haifa International Film Festival.

While living in the French city of Metz in 1945, she enlisted in the army to spy in Nazi Germany for the Allies.

Her contribution to the war effort helped bring about the end of the war.

She now tours the world, talking to audiences about her story and promoting her message to people of all generations.

Marthe flew to Tel Aviv from Charles de Gaulle Airport in Paris with her husband Major.

Pictured is Usishkin onboard with Marthe and Major.