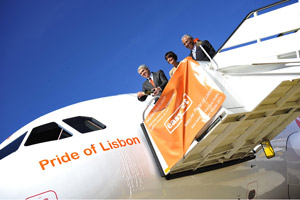 EasyJet is to open its 20th European base in Lisbon.

The budget carrier aims to add ten new routes to the 15 already operated from the Portuguese capital.

The investment from the end of 2011 is expected to bring an additional one million travellers to Lisbon a year and create 2,000 direct and indirect jobs.

The airline was making the announcement in the city today while christening its latest Airbus A319 the ‘Pride of Lisbon’.